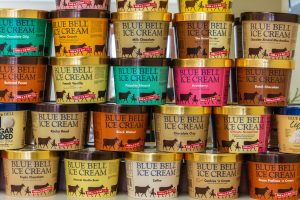 The newest, most disgusting trend among Gen Z-ers (which the super-scientific discipline of sorting Americans into neat little age groups says is made up of people born between 1995 and 2015) is gaining speed on social media, but here’s why that’s a good thing.

You see, these kids seem to love attention—even when they’re getting attention for doing something that isn’t only disgusting but highly illegal. So, when they show their baby faces spitting into mouthwash bottles or licking opened cartons of ice cream, that paired with any other identifiable information tacked onto their internet use makes it that much easier for local police to locate them.

So far, that’s exactly what has already happened a few times.

The now-infamous Texas teen who took a big ol’ cowlick from a carton of Blue Bell ice cream before putting it right back in the freezer was caught by authorities on Friday. Her boyfriend, who can be heard egging her on in the video, which has been viewed well over 11 million times, was caught as well.

“The video hit social media June 28, launching an investigation that led from Walmart stores in San Antonio to Houston and eventually Lufkin,” reads an announcement in a Facebook post by the Lufkin, Texas Police Department. “…At 1:10 p.m. today, Blue Bell contacted us, saying that they believed the viral video took place in the Lufkin Walmart store and that they had retrieved what they believed to be the tainted container of ice cream.”

“By 4 p.m., detectives had obtained surveillance video placing a woman matching the suspect description in the Lufkin store on June 28 around 11 p.m. Detectives believe they have the woman identified and the investigation is ongoing,” the post continued. “Appropriate charges will be filed, according to Lufkin Director of Public Safety Gerald Williamson.”

Before police discovered that the suspect is under 17 years old, she faced up to 20 years of prison time and $10,000 in fines for the second-degree felony of tampering with a consumer product per the Texas state penal code, according to NBC News. Instead, the Lufkin Police Department says the girl “faces charges related to the incident, they will be ‘at the discretion of the juvenile justice system.’”

Her boyfriend, on the other hand, is an adult, and charges against him are still pending.

However, it isn’t just delinquents of Generation Z that are getting into this disgusting craze. A 36-year-old from Louisiana, Lenise Lloyd Martin III, was charged for licking Blue Bell ice cream and placing back on a store shelf for a similar shock video.

While Martin at least had the decency to pay for the ice cream before staging the video and take it back off the shelf again once he was done, the dude still wound up in handcuffs:

Man licks ice cream and puts it back

HE STILL GETS ARRESTED

Staging it doesn't change the fact you committed a crime.https://t.co/oiRlsBXt4n

“Martin presented to deputies and the manager the receipt for the ice cream which matched the one he contaminated. Authorities then searched the freezer and could not locate the container. Deputies said there was a continuation of the clip and you see Martin take the ice cream off the shelf a second time,” reported KTBS3 ABC.

“We do know that he paid for a container that was identical to the one that he did lick and we could not find it on the shelf,” said Commander Lonny Cavalier of the Assumption Parish Sheriff’s Office.

Martin was arrested “for the unlawful posting of criminal activity for notoriety and publicity, 1 count of criminal mischief for tampering with property,” according to KTBS3 ABC.

On second thought, maybe y’all should go back to eating Tide Pods.