Donny Deutsch: Trump Is Not the Bad Guy, His Supporters Are 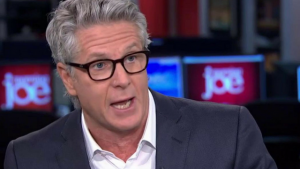 Apparently, the left has not learned from Hillary’s whole “deplorable” fiasco.

They’re still demonizing Trump supporters and comparing them to the Nazis. This is ironic of course because the Nazis were great at using such hyperbolic rhetoric to push their fascist agenda.

Unfortunately for Democrats, this is the United States in 2018, not Germany in 1933, and this kind of drama will most likely blow up in their faces.

After all, they want votes, don’t they? How do they expect to sway voters by calling them Nazis?

reports on a particularly hysterical assessment from pundit Donny Deutsch, who made this worn-out comparison on MSNBC’s “Morning Joe” on Friday:

Mr. Deutsch said Trump voters are complicit in his purportedly cruel immigration policies and that Democrats should exploit that fact if they’re going to have a chance in November.

“What the Democrats have to do is make the next election a referendum on not who Trump is, but who you are. That’s the big difference,” he continued. “You can no longer, now as a voter — because it’s not about taxes, it’s not even about some abstract term of immigration or nationalism — if you vote for Trump then you, the voter, you, not Donald Trump, are standing at the border, like Nazis, going ‘you here, you here.’”

“And I think we now have to flip it. It’s a given the evilness of Donald Trump. If you vote, you can no longer separate yourself. You can’t say ‘well he’s OK, but.’ And I think that gymnastics and I think that jiu jitsu has to happen,” he added.

So, which martial art are the Democrats going to use to twist people they’re labeling “Nazis” into voting for their policies, I wonder?

Pretty sure even George St. Pierre couldn’t turn this pathetic narrative around in time for the primaries.

Thanks, Donny Deutch, for reminding us all once again just how incredibly happy we are to be considered deplorable Nazis by the likes of you.