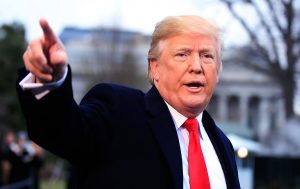 His “America First” policies are melting the easily offended snowflakes that have protested him as being unAmerican. His focus direction and results have proven those claims to be completely false.

It is my opinion that by the end of his first term President Trump will be considered one of the most successful presidents in the history of the United States.

If you disagree then just take a look at this list of accomplishments as compiled by Breitbart (these are just a few).

Wow! So much for the leftist narrative of “he hasn’t accomplished a single thing.” Go back and read that list again. Memorize it. He is truly bringing America back to powerful and unique greatness.

The idea of a Hilary Clinton presidency is unfathomable. It would’ve been disastrous. But so would the election of any other Republican candidate that ran for president. None of the items on the aforementioned list would’ve been accomplished. Unfortunately it would’ve been politics as usual.

The campaign, nomination, and subsequent election of President Donald J Trump can only be explained in terms of Divine orchestration. How else can you define it? Hilary Clinton had the 2016 election bought and paid for and STILL LOST! Some point the finger at Russian collusion but there’s far more evidence that the grace of God on our country put Donald Trump in the Oval Office.