Donald Trump Shreds Biden, Says It’s ‘Inconceivable Anybody Could Be So Incompetent, Stupid’ 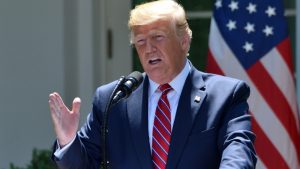 Former President Donald Trump has never been a man who minces words, but his current critique of President Joe Biden and his failure of biblical proportions in contributing to the fall of Afghanistan, is probably the most ruthless and brutal we’ve seen come from him the whole time he’s been involved in politics.

Trump conducted an interview with Newsmax where he shredded Biden, saying “it’s inconceivable that anybody could be so incompetent, stupid.”

Ouch. The president is going to need a can of burn spray for that one.

“Use any word you want to use,” Trump stated during the Wednesday edition of  “Greg Kelly Reports.” “To imagine that you take out your military before you take out your U.S. citizens, and the civilians and others that maybe helped us – to even think of that, it’s not something that can be believed.”

The former president then went on to tell show host Greg Kelly that Biden permitting the Taliban to so easily and quickly assume power in Afghanistan is an even bigger failure than refusing to take proper action to stop the crisis at the southern border between the United States and Mexico.

Trump blasted the vacationing Biden in an empty situation room at Camp David, Maryland, calling the photos put out by the White House a mere photo op – ironically a phrase used to disparage his presidential walk to an arson-hit church outside the White House amid George Floyd riots last summer.

“It was just a setup picture to try and show that he’s working, and he’s not working,” Trump continued. “And more importantly than not working, their thought processes are wrong. The whole group of them, they don’t know what they’re doing.”

Trump called the unfolding chaos in Kabul “disgraceful,” referring to his past discussions with Taliban leaders as he sought a peace deal before a “conditions-based” withdrawal from Afghanistan.

“I spoke with the heads of the Taliban – I had very, very tough conversations,” the former commander-in-chief said. “There would be hell to pay if anything happened like this.”

“And by the way, who could even think something like this was going to happen, but they knew that there would hell to pay, and it would start right at their village where they all lived – where they lived very happily. We had we had this worked out. It was going to be great,” he added.

Biden’s bungling of more than just Afghanistan is all the consequence of the “rigged election,” Trump concluded.

Trump is right on the money. If Biden wasn’t the current president, the likelihood the Taliban would have been able to take over Afghanistan is slim to none.

In fact, Trump had done a fairly decent job of creating peace in the Middle East, brokering a number of deals that folks thought were impossible to reach.

Apparently, all of that went straight down the crapper as soon as Biden assumed power. And this is only his first year in office. Just imagine how horrific the next three will end up being.