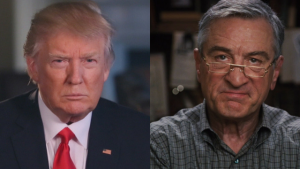 President Trump has just made history. In his unprecedented meeting with North Korean dictator Kim Jong Un, he has gotten closer to achieving peace on the Korean peninsula than any American president since the war began in the region decades ago.

And yet, amid all the fanfare, he found time to bash Robert De Niro on Twitter following the actor’s profanity-laced rant against the President at the 2018 Tony Awards.

If Trump ever can’t find time to hit back at critics on Twitter, we should be worried.

At the Tonys, De Niro took to the stage to valiantly and bravely declare “F*ck Trump!” which he is now choosing to say instead of “down with Trump”, as he explained. This certainly took some guts considering the crowd was packed with MAGA-hat sporting Trump supporters.

Just kidding. It was the Tonys.

You couldn’t choose a friendlier crowd in front of which to bash trump. Remember, De Niro isn’t actually a bada$$. He just pretends to be one in front of a camera. At least, he did 20 years ago. Now he basically just incoherently rambles about how much he hates Trump. And he chose the safest possible place to unleash his rage at the President.

Nonetheless, the President was not having it:

“Robert De Niro, a very Low IQ individual, has received to many shots to the head by real boxers in movies. I watched him last night and truly believe he may be ‘punch-drunk,'” Trump took the time to tweet in the middle of saving the world.

He added that De Niro fails to “realize the economy is the best it’s ever been with employment being at an all time high, and many companies pouring back into our country.”

“Wake up Punchy!” he signed off.

We have grown used to the fact that Trump will rarely back down from an opportunity to bash a critic, especially on Twitter. But the truth is, he doesn’t even have to respond to this level of vitriol. No one cares what these washed-up, out-of-touch, vastly wealthy and vastly whiny Hollywood celebrities who think we care what they think because they’re good at feigning emotion on camera.

We don’t. But as long as they keep ranting, we’ll probably get Trump 2020, so why not, Hollywood? Just let it all hang out and we’ll just sit here enjoying all the winning.