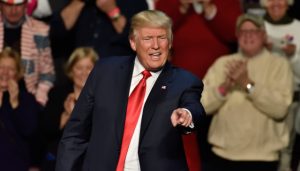 Former President Donald Trump recently sat down for an interview with “Kash’s Corner” on Epoch TV where he revealed that if he should run for president again and be reelected, the first executive action he would take in office would be to restart construction on the wall along the U.S.-Mexico border.

The 45th president stated that building the wall along the border is critically important because it projects a message of strength to other leaders around the globe, such as Chinese President Xi Jinping.

“First of all, the wall, even for him,” the former commander-in-chief said referring to the Chinese president. “You know why? Because when he sees millions of people pouring into our country, he loses respect for our country.”

“When him and Putin and Kim Jong Un and Iran’s leaders, when they’re watching millions of people walk into our country … They lose respect,” Trump said.

“It’s so easy. You close it up, you got to close it up. And that would send a big signal, a really big signal,” the former president stated. “And then you’ve got to get their respect again. How do you do that? You do that by making sure that they know that this country is here and it’s here to stay and we’re not going to take any nonsense.”

Ever since Joe Biden took over in the White House, our country has been experiencing record numbers of migrant encounters.

Last spring, Vice President Kamala Harris was given the task of handling the border crisis. However, critics have slammed her over and over again due to the fact that she has taken very little action to resolve the issue.

Things are so bad along the southern border that former White House advisor for Trump, Stephen Miller, believes that Biden should be impeached.

“During an interview on Fox News, Miller argued that the first articles of impeachment against Biden should be over his administration’s refusal to honor a court order about the Remain in Mexico policy, which was created by President Donald Trump that allowed the government to send illegal aliens back to Mexico before their trial date,” the Conservative Brief reported.

“They need to have an agenda for holding this administration accountable, and for issuing subpoenas to ensure that that happens,” he continued. “And if they do, they will go down in history as the greatest Republican majority we’ve ever had.”

“During the last administration, President Trump directed an agency within ICE known as Homeland Security Investigations, or HSI, to conduct nationwide worksite enforcement. In fact, we had the largest worksite rate in American history under President Trump, which I was very proud to have taken place. All of that is now shut down,” Miller remarked.

“If you work illegally in this country, you will be able to take an American job using a fake identity, stealing a Social Security number, and collecting public benefits the whole entire way through. I want to talk also about the parole issue that Bill Melugin just mentioned. Parole is like DACA or deferred action for people who are outside the country who want to come in illegally,” the former White House advisor said.

“So, in other words, DACA, or deferred action, if you are here illegally, says you can stay here, you have protection from deportation and you can apply for a work permit. That’s what they’re doing now for illegal aliens outside the country, newly arriving. Parole is supposed to be for a very rare humanitarian emergency. The classic example used is for someone, for example, who needs to donate an organ. They are a match and they have to get into the country to donate a kidney,” he stated.

“That’s what it’s for. It’s being used to bring in illegal aliens en masse to take American jobs. And one other point I want to make about this, everything that the administration is saying, they need to raise taxes on you to fix our terrible public school test scores, our overcrowded emergency rooms, our dilapidated infrastructure. All of those problems that they want you to believe you caused are caused by third-world migration,” he said in conclusion.