Donald Trump Jr. Smacks Pelosi, Obama, And Other Democrats For Hypocrisy, Says ‘Rules Are Not For Elite’ Dems 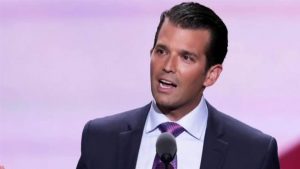 According to Donald Trump Jr., son of former President Donald J. Trump, Democrats like John Kerry, Nancy Pelosi, and Barack Obama have been putting their full hypocrisy on display in front of all Americans by flying around in private planes and holding huge birthday bashes, while laughing at citizens who are being forced to social distance, get vaccinated, and wear masks.

“The rules are not for the elite; they’re proving it more and more everyday,” Trump Jr. stated during a conversation he had on Monday’s “Rob Schmitt Tonight.”

“They laugh at you when you actually push back on it,” he added.

“They’re laughing at you,” Trump Jr. said to show host Rob Schmitt. “They’re making these rules, and they refuse to abide by any of them.”

“It’s as though they think we’re not capable of watching their own actions,” the former president’s son added.

“Nothing happens with Andrew Cuomo,” Trump Jr. went on to point out. “There’s no consequence if you’re a Democrat. Nothing happens. I think between Michael Avenatti and Andrew Cuomo, it’s pretty clear to me that if you’re one of CNN’s favorite next-president type characters, you’re actually more likely end up in prison than the Oval Office.”

Avenatti is imprisoned for extorting Nike, while Cuomo is under criminal investigation for alleged grabbing the breast of Brittany Commisso, former “executive assistant #1” as depicted in New York Attorney General Letitia James’ report on the allegations from 11 women against Cuomo.

“The people in the Democrat Party aren’t going to go after him,” Trump Jr. explained. “They’ll do just enough damage for their political ambitions of the people who want to don’t follow him.

“That’s what’s going to happen, and it’s a shame because you know this is a big issue, obviously, but the bigger issue that nothing’s going to happen on him is the nursing home deaths,” he said.

“I hope that I’m wrong, but I’ve been watching closely for the last few years and I think I figured out how they play this game, and it’s very different than the rules that would be subject to you or I,” Trump Jr. finished.

Well, the good news here is that Cuomo just resigned today, so he’s at least paying some sort of price for his wrongdoing. He made that decision after almost every single Democrat in his party called on him to resign from office.

But when you look at the amount of sexual harassment allegations against him, coupled with all of the controversy with the deaths he caused in nursing homes, it makes you wonder why the left waiting so long to oust him from office.