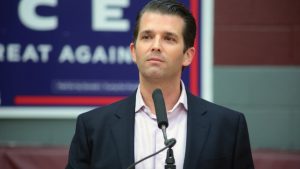 Donald Trump Jr. dropped a big hammer on Rep. Liz Cheney, an alleged Republican from the state of Wyoming, stating that in order to save her currently flailing political influence, she has made the decision that being anti-Republican is a “better business model.”

“She’s probably never going to win something else, because she’s clearly not willing to represent the people of Wyoming, arguably the most conservative state in the union, overwhelmingly pro-Trump,” Trump Jr., said during his interview on Wednesday’s “Stinchfield.”

“She’s decided that there’s a better business model to be anti-Republican. That way she can get a little attention from the left. The media will love her. They’ll give her a role on CNN when she inevitably loses her job in Congress. That’s what it is,” he continued.

Cheney, who’s father is former Vice President Dick Cheney, a frequent target of Democrats when he served under former President George W. Bush, has decided to side with her one-time detractors in order to get back at former President Donald Trump’s criticism of the family and the Iraq War.

“She might as well be a Democrat,” Trump went on to tell show host Grant Stinchfield. “With Republicans like that, you don’t need Democrats, because they will do their bidding.”

House Speaker Nancy Pelosi, D-Calif., has seized on Cheney’s anti-Trump crusade to use her to sell the narrative to the media that her Jan. 6 panel selections are “bipartisan,” Trump Jr. warned.

“So she’ll find the one or two useful idiots in Congress, Nancy Pelosi will,” Trump went on to say. “They’ll empower them to make it seem like it’s bipartisan. They’ll be running around and saying, ‘it’s a bipartisan committee,’ because she got Liz Cheney and Adam Schiff. Give me a break.”

The eldest son of former President Donald Trump then stated that it’s outrageous political spin and that Americans shouldn’t fall for it.

Trump Jr. then went on to conclude that the current administration’s shortcomings since his father left the White House have exposed all of the false promises that President Joe Biden made during his campaign.

“They’ve been watching and they’re realizing now that they’ve been lied to, and then they realized that the administration will be very patronizing to them,” he said, going on to add, “Like telling them they’re saving 16 cents at their Fourth of July barbecue, when everyone with a brain realizes that if you start your car and drive about 2 1/2 feet down your driveway that 16 cents is gone because of stupid policies by radical Democrats.”

“This administration is not the moderate administration that the American public was sold by the Democrats, by the mainstream media and social media. It’s the most radical administration probably in American history, and we are reaping those results. We are seeing the ‘rewards,’ and they’re not so good for the American people. They have been a disaster on every front and Americans get it,” he finished.