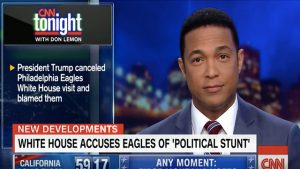 CNN host Don Lemon decided to weigh in on President Trump’s feud with the National Football League regarding players kneeling for the National Anthem in front of paying customers and on national television.

As you might expect from a ridiculous left-wing propaganda machine, Lemon stated that the president is promoting “fake patriotism” by supporting folks standing for the National Anthem.

Yes, it’s apparently a bad thing to stand up and show respect for your country, your flag, and the folks who bled and died to provide you with freedom and liberty.

“This isn’t about some fake patriotism, about standing or some pageantry,” Lemon said on his show. “Real patriotism is understanding what the Constitution means for all Americans and abiding by the Constitution, not doing some false presentation that you pretend to be a patriot while other people are around you going to the concession stands, getting beer, or fights in the stands or talking to each other with their baseball caps on.”

“That is not real patriotism,” he continued. “Real patriotism is understanding that all of us are created equal and we have the choice to stand, kneel or sit, or even attend a football game if we choose to.”

“What makes this country great is that we have the choice to stand or not to stand during the national anthem. This is not a dictatorship,” Lemon continued. “We don’t have to do anything in this country.”

“He cannot be a unifier. He cannot be the unifier in chief. I don’t know what it is about him that he can’t do it,” Lemon said. “It seems that this is an issue where he could actually bring the country together, bring the team and talk to team owners and players, and try to get them to come to some sort of consensus about this.”

It’s easy to see where Lemon is coming from, however, standing for the National Anthem is a show of respect for the principles this nation stands for. Sure, in the past, America has made some pretty awful mistakes.

However, those mistakes should not be what defines her, but rather what she believes and the progress the country has made over the years is what should define her.