Dolly May Be Top Heavy…but you aren’t going to pull her down! 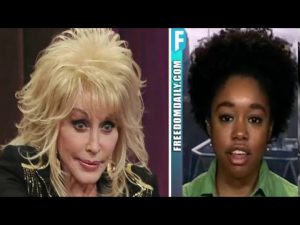 BLM leader Aisha Harris discovered that she bit off a little more than she could chew when she tried to make an easy target out of the legendary Dolly Parton.

In her Slate.com article she writes:

“It’s a lily-white kitsch extravaganza that play-acts the Civil War but never once mentions slavery,” Harris wrote. “Instead, it romanticizes the old South, with generous portions of both corn on the cob and Southern belles festooned in Christmas lights. At its sister staging in Branson, Missouri (the original is up the road from Dollywood in Pigeon Forge, Tennessee), it’s put on at a venue that can only be described as resembling a plantation mansion. Also, everyone in the audience must pick a side.”

Harris obviously knows nothing about the incredible things Dolly has done for the people of Tennessee. I think if she’s pursues this line of thinking much further Dolly may have a “hold my wig and watch THIS!” moment.

This obsession with erasing our nation’s history has gone way too far, yet it shows no signs of slowing town.

Liberals and their ilk will never be satisfied until they have destroyed monuments to our most beloved founding fathers George Washington and Thomas Jefferson, who are now considered “evil” because they owned slaves.