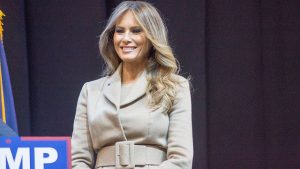 The United States Justice Department is filing a lawsuit against former Melania Trump senior adviser Stephanie Winston Wolkoff for allegedly violating a nondisclosure agreement that she signed while employed at the White House.

Wolkoff, who was once considered a close friend of the first lady, taped conversations without Mrs. Trump being aware of it and then leaked them out to the media as a means of promoting a new book she had written called, “Melania and Me: The Rise and Fall of My Friendship with the First Lady.”

The suit asks that profits from Wolkoff’s book put into a government trust, according to Reuters.

“The Justice Department alleged in the suit that Ms. Winston Wolkoff violated a nondisclosure agreement she had signed with the government when she agreed to volunteer to help Mrs. Trump in the early months of the administration,” The New York Times reported Tuesday. “The pact forbade her from disclosing confidential details she learned during her time working for the first lady, the lawsuit said.”

According to the suit, “Wolkoff has been, and will continue in the future to be, unjustly enriched in the amount of profits, advances, royalties and other advantages resulting from publicity given to the unauthorized disclosures contained in her book.”

“It represents an effort by the Trumps to enlist the D.O.J. to pursue entirely personal goals and interests,” the attorney said. “The position staked out in the lawsuit also violates the First Amendment.”

If she signed the nondisclosure agreement and then leaked these audio files, which, hello, she obviously did, then she’s guilty as charged. In fact, this lawsuit should pretty much be a slam dunk. Let’s hope this woman gets held accountable for her actions.