Does It Even Matter if a Democrat Calls You Racist? 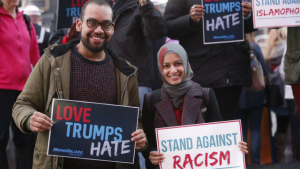 The term “racist” has been one that is frequently on the lips of politicians, pundits, and commentators these days, but in some ways, it seems to have lost all meaning.

Following the Roseanne scandal (yes, I’m sorry, here we are discussing it again), there was a lot of in-fighting among conservatives between those who wholeheartedly condemned her words and felt her firing from ABC was completely appropriate…and those who paused a moment and said “hey, there seems to be a double-standard here.”

The truth is, writes Michael Knowles of The Daily Wire, we don’t necessarily need to bicker over these two points–there’s truth in both of them.

“Two things can be true at once,” he says in his recent post, Who Cares If Democrats Call You Racist?

“Roseanne’s now infamous Valerie Jarrett joke was in poor taste, mean, and unfunny — hence her immediate and repeated apologies. Also, the popular furor to fire her along with the hundreds of crewmembers, actors, directors, and producers who worked for her is mostly motivated by the Left’s hysterical contempt for anyone even vaguely supportive of President Trump. How else to explain the sudden cancellation of Tim Allen’s hit, conservative show Last Man Standing or MSNBC’s continued employment of Joy Reid, who used her blog to spread offensive accusations about whole groups of people, including the smear that gay men categorically prey on young teenage boys?”

He says that allowing these two ideas to co-exist has not been an easy pill to swallow for some conservatives, who fear the deadly wrath of being labeled “racist” by Democrats, “as if Democrat activists haven’t already belched that smear at every Republican candidate in modern political history.”

It’s true! Do not Democrats already systematically call us racist? Do they not find ways to twist literally every proposed conservative policy into some kind of racism? Are they not the originators of the ridiculous concept of “microaggressions”, suggesting literally everyone is subconsciously racist?

“If you can say the same, then congratulations: you’re not a racist.”

That’s right, kids: racism is not defined by the person hurling accusations at you, but by the way you genuinely feel about and treat other people. It’s just that simple. It doesn’t matter what leftists and progressives say–they do not, despite what they think, have the ultimate moral authority on…well, anything.

“Roseanne deserves to be chided for her bad joke, and she was right to apologize,” he adds.

“But which is more likely: the eccentric, admittedly mentally unstable pop culture figure we’ve all known for decades told a crude, rude, unfunny joke; or that Roseanne Barr is suddenly a white supremacist? No conservative needs to defend Roseanne; she’s a thick-skinned showbiz veteran who can defend herself. But neither should conservatives rush to condemn her in the pathetic, grandiose, desperate hope of winning the radical Left’s approval.”

I think that just about sums it up, don’t you? Only the Lord knows your heart at the end of the day, so don’t worry about the degradading opinions of people who you disagree with on just about everything else, anyway.