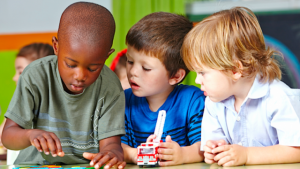 We’ve been hearing for far too long from the left that sexism and misogyny start at childhood, and that it’s up to us to make sure little boys and girls are carefully de-programmed from the natural inclinations of their gender.

This is all while diagnosing five-year-olds with gender dysphoria, giving them hormone blockers, and scolding their classmates for using the incorrect pronoun, of course.

Little boys who are naturally “masculine”, like the vast majority of little boys are? Must be stopped. Little boys who show any hint of being “feminine”? Let him do his thing.

Do you see a trend here? It’s the feminization of little boys.

Of course, to radical gender feminists, who happen to have a quite dominate presence in American academia, it is natural masculinity itself that is toxic.

And now, argues one professor, little boys ought to be trained not to perpetuate this dreaded toxic masculinity.

A professor at the University of Wisconsin-Whitewater is calling for K-12 schools to create programs to combat “toxic masculinity” from kindergarten all the way through high school.

Elliott argues that by integrating collegiate “Men’s Projects” — which, according to Campus Reform, are programs that “typically probes participants to reflect on the ramifications of masculinity” — into K-12 schools could help eradicate “toxic masculinity.”

So, how does this particular school of thought define “toxic masculinity”? The Blaze cites Tolerance.org:

Toxic masculinity is a narrow and repressive description of manhood, designating manhood as defined by violence, sex, status and aggression. It’s the cultural ideal of manliness, where strength is everything while emotions are a weakness; where sex and brutality are yardsticks by which men are measured, while supposedly “feminine” traits—which can range from emotional vulnerability to simply not being hypersexual—are the means by which your status as “man” can be taken away.

If you’re one of those crazy free thinkers, you may notice something misleading, at best, about this definition.

Is the “cultural ideal of manliness” really one of violence, sex, status, and aggression? What culture? Western Christian culture? Because I don’t really see that, sorry.

Different cultures have different ideas of manliness, and lots of guys throughout human history have been absolute jerks or even downright monsters, to women. This is true.

But it’s entirely dishonest to reduce the cultural idea of manliness down to these brutish terms when so many men throughout history and right here today use their drive for “status,” their strength, and their ability to repress emotions for the good of all mankind.

Wars, law enforcement, first responders, rescue workers during natural disasters like Hurricane Harvey; many men use their natural masculinity to help and protect women and children every single day.

In Western culture, it has for centuries been considered virtuous for a man to selflessly dedicate his life to providing for his family and contributing to society, not to run around chasing women and being a jerk.

Strength is a good thing and learning to “repress emotions” can be a very good thing too at times, for both men and women.

But is it really a good thing to tell little boys that their natural inclination to display strength, compete, and strive to “be a man” is wrong and they ought to strive to be more feminine?

Aren’t we being constantly told, after all, that it’s wrong to suppress someone’s “gender identity”?

There is, truly, nothing wrong with “being a man”, and both men and women can use their masculinity or their femininity for good, or for bad.

But feminists seem determined to rewrite the human race until it fits their agenda perfectly which is, sadly for them, never going to happen.