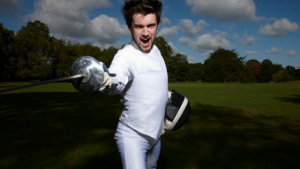 For the first time since the thinly-veiled gay character in the live-action Beauty and the Beast caused quite a stir last year, Disney will soon be releasing a live-action film with an openly gay character.

British comedian Jack Whitehall has been cast in the role and will star alongside Dwayne Johnson and Emily Blunt in the film version of The Jungle Cruise (yes, Disney is still making films based on Disneyland rides).

There’s only one problem.

He’s a straight, white male, so the LGBT community has found him to be intersectionally unqualified to play the part.

A source told The Sun that the character played by Whitehall will be “hugely effete, very camp and very funny,” which also has people upset, because the first openly gay Disney character can’t be a stereotype as well as played by a straight white male, you see!

Sky News reports on the backlash:

Actor and producer Emerson Collins added: “It’s too bad there weren’t any out actors who are regularly called some euphemism for ‘too camp’ by casting directors, studios, networks, executives etc. for literally any role who were available for this Disney ‘first’.”

Maybe you can clear something up for me, because I’m confused: is there a single Disney movie out there that isn’t full of archetypical, light-hearted characters without much depth or realism to them?

It’s almost as if they expect a Disney movie to be free of campy stereotypes and goofy caricatures!

Some people will never be happy.