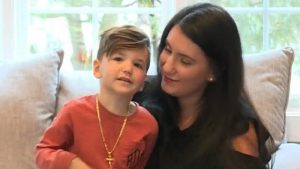 The Make A Wish Foundation is getting slammed right and left after the organization decided to deny the wish of a 4-year-old child due to his vaccination status.

Welcome to the new state of the world, folks. Progressives have managed to divide us racially, economically, politically, and now along the lines of our own personal health choices.

Rocco DiMaggio, a 4-year-old cancer patient, was denied his wish to visit Disneyworld because he’s not vaccinated.

Now, to be fair, we aren’t sure as of this writing whether or not the final decline for the wish came from the foundation or from Disneyworld, but kids this age aren’t even eligible to receive the vaccine yet.

A report written up by Todd Starnes explains that this decision is all because of the one size fits all medical apparatus our nation is now dealing with.

“It was a punch in the gut,” the boy’s mom went on to tell Newsmax concerning the organization’s policy that led to canceling the Disneyworld trip.

Who are these garbage people and how did they rise to a position where they can make such disgraceful decisions? https://t.co/QtGZjKdqeQ

“They were ready to move forward with Rocco’s wish,” the mother said, until the person from the Foundation asked if all the membersin the family had received the vaccine. She replied that they were not.

What’s more, the poor kid already had the coronavirus twice and is also immunocompromised, so his mom isn’t even sure that she would give him the vaccine if she could.

But that’s not really the point. Here we have this young man who has barely had a chance to enjoy his life, fighting for every breath he takes, and all he wants to do is go to Disneyworld. And this organization, which solely exists to help make a child like Rocco’s wish come true has denied him this pleasure all because he did not receive a medical treatment that by law he’s not even allowed to get.

This is pure insanity.

“However, two organizations, Wigs & Wishes and Millenium Systems International, are teaming up to make Rocco’s wish come true later this year — just in time for his fifth birthday,” Starnes went on to say in his report. Guess there are still some good people out there after all.

“Looks like I need to find a different charity to support. And this was one that I had always believed had the best interest of kids,” one Twitter user said in a post.

Looks like I need to find a different charity to support. And this was one that I had always believed had the best interest of kids.