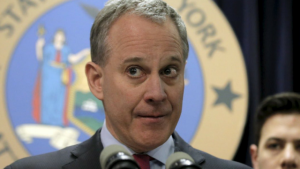 The New York Attorney General who was recently accused of explosively cruel sexual abuse after enthusiastically supporting the #MeToo movement (oh, Democrats) seems to have a whole other mess on his hands: he was apparently a total crook of an AG, too.

When Eric Schneiderman resigned May 7th following the New York Times piece profiling his alleged victims, one of the first people to come to his defense was his ex-wife, which, considering an ex-wife is usually the last person ever to come to a man’s defense, seemed like a pretty credible defense of his character.

Until you consider that his ex-wife just so happens to be Jennifer Cunningham, one of the most powerful Democratic lobbyists in the state of New York.

Who also appears to have been working hand-in-glove with Schneiderman to secure ethically questionable associations between private companies, Cunningham’s lobbying and public relations firm, SKDKnickerbocker, and the AG’s office.

“Though they divorced in 1996,” the Daily Caller reports, “Cunningham remained one of Schneiderman’s closest political advisers — so close that Cunningham worked as an unpaid adviser for Schneiderman before his fall from grace.”

“That pro bono relationship has been met with skepticism from some New York political observers and government watchdog groups — largely because of Cunningham’s position as a top partner at SKDKnickerbocker,” they add.

They also explain the “numerous examples of potential conflicts of interest mark the Schneiderman-Cunningham relationship,” which include meetings Cunningham arranged for Schneiderman with companies her firm represented as well as investigations into other companies that went dead once they hired Cunningham’s firm.

These kinds of relationships were apparently entirely legal at the time, but Tom Anderson, the executive director of the National Legal & Policy Center — a good government watchdog that has uncovered corruption in New York, says this is exactly what’s wrong with it.

“If you wanted something from the Attorney General’s office, you had to go through her, and you had to bring your checkbook. The real scandal in New York is that all of this is legal,” Anderson told The Daily Caller.

“Schneiderman’s ex-wife was one of the biggest power brokers in the state, a modern-day Boss Tweed,” he added.