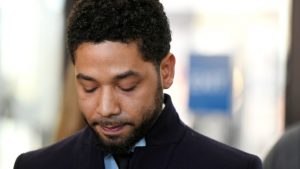 Disgraced actor Jussie Smollett, who is now a convicted felon, is, according to new reports, totally and completely confident that an appeals court will end up overturning the five felony convictions he was found guilty of for a hate crime hoax that he staged on himself back in 2019.

Smollett was found guilty Thursday on five Class 4 felonies for telling local law enforcement officers and detectives a whole bunch of lies stemming from a staged hate crime hoax he tried to blame on Trump supporters.

Fox News stated in their report, “Count 1 accused him of telling responding Chicago Police Officer Muhammed Baig at around 2:45 a.m., some 45 minutes after the purported attack, that he was the victim of a hate crime. He said two attackers put a rope around his neck. Count 2 referred to Smollett telling the same officer he was a victim of a battery, describing attackers beating and pouring bleach on him.”

“Counts 3 and 4 stemmed from Smollett making the same claims but to a different officer, Kimberly Murray, later that morning, just before 6 a.m.,” the report continued.

“Count 5 accused Smollett of again telling Murray at around 7:15 p.m. that he was the victim of a battery. Count 6 referred to Smollett reporting on Feb. 14, 2019, to detective Robert Graves that he’d been a victim of an aggravated battery,” Fox News said.

via the Daily Wire:

Speaking with reporters following the verdict, Nenye Uche, lead attorney for Smollett, said that the now-convicted felon was “100 percent confident” that he would be found innocent on appeal.

“He’s a human being; he’s disappointed — but I will tell you this: I am very proud of him. I’m very, very proud of him,” he added. “He’s holding up very strong; he’s committed to clearing his name and he’s 100 percent confident that he’s going to get cleared by the appellate court.”

“From the first day of this case, his case has been prejudged, his case has been tried in the media, and it’s unfortunate, this is the United States of America,” he continued, “We live in a constitutional democracy where everyone is presumed innocent but obviously, if we’re being honest, that hasn’t been the case.”