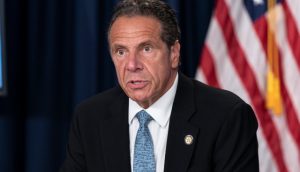 Former New York Gov. Andrew Cuomo promoted an opinion piece on Wednesday that went on to describe his resignation amid a ton of sexual harassment allegations as a “coup.”

Newsweek reported on the column, which was written by “self-described lifelong Democrat” David Pikus, which appeared on the Wednesday edition of Newsday. Cuomo posted the link to the article on his Twitter account along with the caption saying, “This was politics. Every step of the way.”

Talk about being “tone deaf.” Geesh.

Pikus wrote that he is “appalled by the Albany coup d’êtat in which Andrew Cuomo’s political rivals trampled the rights of the electorate and basic due process for their own political gain.”

Cuomo resigned his position as governor in August following a report from the New York Attorney General who found that Cuomo had sexually-harassed 11 women, many of them current or former state employees.

After the report’s release, prominent Democrats, including President Joe Biden, called for Cuomo to step down or be removed from his position. State lawmakers also opened an impeachment inquiry into the former governor.

Unsurprisingly, Cuomo himself denied the findings of the report that was completed. During his farewell speech, the former governor tried to play the victim card, saying that everything was the result of a “political and media stampede” and then went on to state he was resigning so as not to be a distraction for the government in completing its work.

Pikus also disputes the report, going on to say, “There is a major difference between what an individual may find personally ‘offensive’ or ‘insensitive’ and what is ‘illegal.’ The James report drew no such distinction.”

“As Democrats, we support the right of sexual harassment victims to come forward. But it need not be at the expense of sacred constitutional rights designed to protect all citizens, individually and collectively, against the seizure of political power from a duly elected leader,” he then added.

“In the long run, we all should be frightened by the notion that our leaders can be driven out by an insular group of politicians subverting the will of the voters,” Pikus stated in conclusion. “Elections matter.”