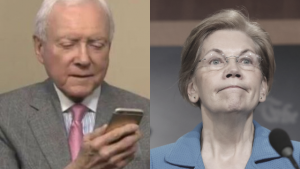 So, it’s not exactly a challenge to troll Elizabeth Warren’s beautiful self-own from this week proving she has, after all, a whopping 0.1% Native American ancestry (at best).

But 84-year-old Sen. Orrin Hatch, who is the longest-serving Republican Senator in the history of our nation, served up an absolutely beautiful own to Warren’s ludicrous genealogical news on Twitter Monday, claiming to be 1/1032 “T-Rex”.

These DNA tests are quite something. pic.twitter.com/tCHmW7pJbj

This is, of course, the same percentage T-rex that Warren claims to be Native American.

Democrats, who can’t take a joke, let alone criticize a woman who has clearly been appropriating Native ancestry to get intersectionality points from her clueless constituents, were sourpusses about Hatch’s awesome joke:

When they speak of how the old senate had more civility, recognize that Hatch has been there for decades and does stuff like this https://t.co/RG01kQChov

Yeah…Sam? There’s a big difference between teasing a Senator and oh, I don’t know, trying to bash down the doors of the Supreme Court because a judge you don’t like is being sworn in.

Hatch made a funny.

Y’all are literally calling to “kick them” and “return to civility once we’re back in power” (Eric Holder and Hillary Clinton, respectively).

So talk to me about civility when your people stop advocating for violence, m’kay?