What You Didn’t Know About Glen Campbell

TMZ reports Campbell died Tuesday around 10 AM in a Nashville facility for Alzheimer’s patients.

The musician released more than 70 albums over a 50-year career, and had a series of hits in the ’60s and ’70s including “Gentle on My Mind,” “Wichita Lineman,” “Galveston,” “Country Boy” and his best-selling single, “Rhinestone Cowboy.”

There are a few facts that you may not have known about the country crooner that we all remember so fondly.

He released more than 70 albums and has sold 45 million records.

He was a touring member of the Beach Boys: On Christmas Eve 1964, Campbell made his debut as a Beach Boy, filling in for Brian Wilson at a show in Houston. Campbell had previously played as a session musician for the band, and was called in as a temporary replacement for Wilson after he canceled several dates due to a nervous breakdown.

John Wayne handpicked him for a movie: Wayne personally picked Campbell to star alongside him in the 1969 movie “True Grit.” Campbell received a Golden Globe nod for his performance and was nominated for an Oscar for the film’s title song.

He was in a high profile relationship with Tanya Tucker: He has been m 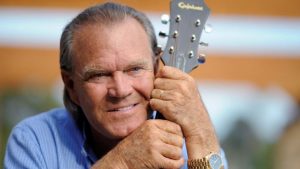 His last song won a Grammy Award:  The singer won the Grammy for best country song for “I’m Not Gonna Miss You,” the final song he wrote and recorded with collaborator Julian Raymond on the heels of his Alzheimer’s diagnosis.

In June, Campbell released his final album, Adios, which was produced by his former bandmate and longtime friend Carl Jackson. The bittersweet record includes a duet with fellow legend Willie Nelson on Funny How Time Slips Away. Vince Gill contributes harmony vocals to Am I All Alone (Or Is It Only Me). Ashley Campbell appears on several tracks, including Postcard From Paris, which also features sons Cal and Shannon Campbell.

He will be greatly missed.