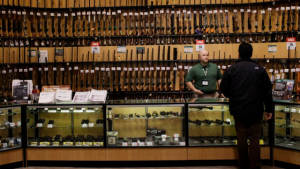 Now, I know what you’re thinking…I’ll take them off your hands for ya! Unfortunately, they’ll be destroying the firearms by the book, according to a spokesperson.

“We are in the process of destroying all firearms and accessories that are no longer for sale as a result of our February 28th policy change,” a spokesperson from Dick’s Sporting Goods told the media outlet. “We are destroying the firearms in accordance with federal guidelines and regulations.”

This probably seems incredibly wasteful, but don’t you worry! According to Fox News, who reports that “the rifles will be demolished at distribution centers and then delivered to a salvage company to be recycled.”

This measure will certainly be very effective in preventing anyone under 21 from purchasing a scary-long rifle from Dick’s Sporting Goods, unfortunately, it will do little else to prevent gun violence.

Considering legal gun owners are some of the most law-abiding demographics in the nation, and criminals care a lot less about whether or not Dick’s sells “assault weapons” to people under 21 than someone who would use a weapon they purchased at Dick’s for self-defense.

Maybe, instead of wasting perfectly good firearms, they could give a discount to teachers who want to concealed carry for the safety of their students, or law enforcement officers whose lives are threatened daily by the weapons purchased by people who do not care about the law.

It’s kind of presumptuous of Dick’s to assume that they can make any kind of impact on gun violence in this country simply by destroying their own merchandise, with absolutely no data to link the types of weapons they previously carried to school shootings or other incidences of gun violence.

No, once again, the corporate fallout following Parkland has turned into the virtue signaling Olympics, and Dick’s Sporting Goods is going for gold.