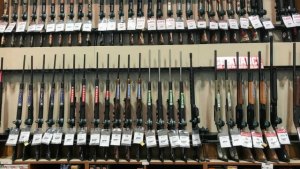 I’m no business expert, but it seems to me that if you want to run a successful and profitable sporting goods store, it is probably a good rule of thumb to not only alienate your client base, but your major suppliers as well.

Dick’s Sporting Goods has received negative press ever since they announced they would no longer sell “assault rifles” in their stores, an incredibly ironic move considering the very fact that they sold “assault rifles” to begin with might clue them and the gun-grabbing bandwagon in to the fact that “assault rifles” are most commonly used for…sport.

Also, it’s worth mentioning also that if you run a sporting goods store and aren’t aware that “assault rifle” isn’t actually a real classification for firearms, that’s another big fail, but again, I’m not the business expert.

They didn’t stop there either–later, they announced they’d be destroying their unsold “assault rifles” because corporate has apparently decided to enter the Virtue Signaling Olympics.

So for their next event, they hired a lobbyist to advocate for gun control.

This is all, mind you, in spite of the fact that a large part of their customer base is inevitably going to be comprised of hunters, sport shooters, and outdoorsmen (although Dick’s probably would prefer the term “outdoorspeople”) who are, let’s face it, most likely strong supporters of the Second Amendment.

It’s not only their customers they’re alienating though–it’s their suppliers too, as–shocker–they sell merchandise from several major firearms manufacturers.

Well, all their virtue signaling is biting them in the rear, as not only have they now been expelled from the National Shooting Sports Foundation, but many of these manufacturers are now cutting ties with the company, according to Town Hall.

Charles Brown, the president of MKS Supply which produces Hi-Point Firearms, also had a thing or two to say about Dick’s recent business moves:

Because the right to keep and bear arms was recognized by our founding fathers to be a fundamental right, they ensured its protection under the Second Amendment. Just as we show our commitment to our customers by standing behind their Second Amendment rights.

In recent months, Dick’s Sporting Goods and its subsidiary, Field & Stream, have shown themselves, in our opinion, to be no friend of Americans’ Second Amendment. We believe that refusing to sell long guns to adults under 21, while many young adults in our military are not similarly restricted, is wrong. We believe that villanizing modern sporting rifles in response to pressure from uninformed, anti-gun voices is wrong. We believe that hiring lobbyists to oppose American citizens’ freedoms secured by the Second Amendment is wrong. Dick’s Sporting Goods and Field & Stream, in purportedly doing all of these things, have demonstrated that they do not share our values.

The left keeps trying to choke out gun manufacturers and the NRA by relentlessly bashing them, and Dick’s is just a casualty of this unsuccessful tactic. It didn’t work for David Hogg when he went after Laura Ingraham’s sponsors. Her ratings spiked after his silly boycott. It also didn’t work for him when he called the NRA “terrorists” and “child killlers”. They saw record fundraising and new membership after his attacks.

And it’s clearly not working out too well for Dick’s to shoot their own business model in the foot and insult the fine sportsmen and manufacturers who were giving them good business.

But hey–isn’t that the beauty of the free market?