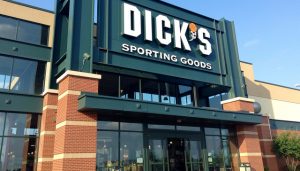 A conservative Second Amendment supporting shareholder in Dick’s Sporting Goods decided to take the company’s CEO Edward Stack to the woodshed during an investors meeting over the recent implementation of policies designed to restrict gun sales in stores.

These policies were enacted as a response to the horrific shooting at Marjory Stoneman Douglas High School in Parkland, Florida earlier this year. Gunman Nikolas Cruz killed seventeen people during the incident.

Shortly after, Dick’s banned the sale of all “assault style rifles” in its stores.

During the annual shareholder meeting Wednesday in Pittsburgh, Almasi reportedly accused Stack of “willfully giving up money” with its recent policy cracking down on weapons.

“Thirty percent of American adults own guns, and another 11 [percent] live with someone who does. You’ve now alienated them,” Almasi added.

According to a recording posted on YouTube, Stack fired back and said, “We did not alienate every gun owner. We did alienate some gun owners. We had a number of people who are gun owners, myself included, who sent us notes saying that, ‘We applaud what you did.’”

“We think this was in the best interest of our shareholders long term,” Stack added. “Did we alienate some customers? Yes, we did. We felt it was the best decision for the long-term aspect of our shareholders. You can see, from our announcement, our stock is actually up double-digits.”

Stack held firm to his position on the issue, stating they would not be changing their position.

Once again, liberals just don’t seem to understand the true root of the problem with gun violence in America. See, if you took away the guns, the criminals would just find another tool to use. Eventually, when all tools have been banned, you’ll have to start cutting off human appendages, because people will still be trying to use them to kill each other.

Because the problem is the fallen nature of humanity, that each of us battles sin in our lives. No amount of gun control will ever make that right or make it go away. God working in the hearts of men is the only solution. But we, unfortunately, have hamstrung God by removing him from the courtroom, the classroom. and every other room in society.

Until we get back to our biblical roots, this nightmare will continue.