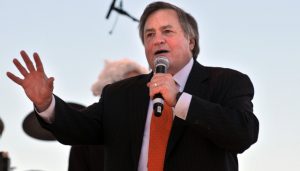 Political analyst and host on Newsmax Dick Morris recently stated that President Joe Biden is “really in deep trouble” politically speaking following the massive screw up with the U.S. exit from Afghanistan.

”Well, the real estate he’s lost is basically between 55 and 46% of job approval, and that’s crucial real estate,” Morris went on to say during  Monday ‘s edition of ”American Agenda” referencing a CBS poll that shows only 47% of Americans approve of the president’s exit strategy.

”That’s like losing half a mile in World War I of the trench warfare because that’s the ground that the election has been fought over and all the major polls have him at or below 50 on job approval, and the most significant one — Rasmussen — has him down at 46 and says if the election were held right now, [former President Donald] Trump would win by 6 points,” he continued.

”That’s the first time in any poll, anywhere by anybody, [that] we’ve seen Trump beating Biden in the popular vote. So, he’s really in deep trouble. The important thing about that is it dovetails with all the personal criticism of him as weak and senile and not up to the job, not competent enough, not energetic enough. Those are criticisms that are out there on people’s minds and the Afghanistan theater illustrates that,” Morris stated.

Biden, who laughed off the poll Sunday in a press conference at the White House, said he had no qualms about removing U.S. troops from Afghanistan, telling reporters he had a decision to make, a judgment that ”no one else can or will make” and that he is convinced he’s ”absolutely correct in not deciding to send more young women and men to war for a war that is not warranted.”

Biden also asserted that allies were not questioning our nation’s credibility, despite the takeover by the Taliban in a matter of days.

The Biden administration may have put the final nail in its own coffin with this whole Afghanistan mess. In fact, if things continue going the way they are, we’re going to end up seeing a huge victory for conservatives during the mid-terms next year.