Dianne Feinstein Spotted Not wearing Mask At Dulles Airport, Despite Her Own Calls For ‘Mandatory’ Policy 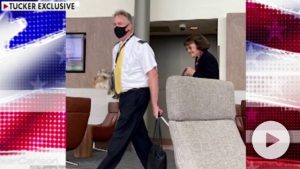 Sen. Dianne Feinstein of California was recently photographed sans mask at Dulles International Airport in the state of Virginia, despite fervent calls for a national mask mandate to be adopted by the Federal Aviation Administration back at the start of the summer.

This is just the latest example of hypocrisy to grace our newsfeeds concerning politicians who want to lord their authority over you to force the pleebs in society — which is anyone underneath them — to wear masks and do their bidding, while opting out of these restrictions themselves.

Sort of like House Speaker Nancy Pelosi’s little visit to the hair salon.

The photos, obtained by “Tucker Carlson Tonight,” show Feinstein on Friday near a man wearing a face mask while walking through Dulles Signature, a terminal at the airport for passengers flying private.

A traveler who was waiting at Dulles Signature at the same time as Feinstein said he was told he had to wear a mask.

Feinstein wrote to the FAA to urge them to “issue clear, nationwide, mandatory mask requirements for all aviation employees and travelers” in late June.

“I ask that you issue guidance as soon as possible so passengers can have a clear understanding of the requirements and so that we may reduce exposure for workers and travelers alike,” the California senator wrote.

Not surprisingly, Carlson tried to reach Feinstein’s office, but calls were not returned at the time of this publication.

Hypocrisy over this mask stuff and other coronavirus restrictions are becoming common place in our country, especially as more and more people become fully aware of the political games being played during a presidential election year.

Certainly does make all of the fuss over these masks seem real fishy, doesn’t it?