DHS Roasts Portland Mayor, Says He Must ‘Prioritize Public Safety’ Or Else Feds Will Have ‘No Choice But To Protect’ Americans 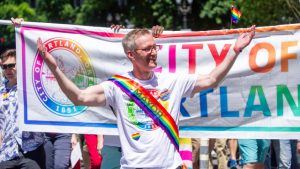 Current Homeland Security Secretary Chad Wolf has penned a letter addressed to Portland Mayor Ted Wheeler, a man who is proving to be one of the weakest leaders in the history of this country — and given the rest of his fellow Democrats today, that’s really saying something — urging him to request federal assistance for his city, which has been shredded to pieces over the last three months.

Folks, these people do not care what happens to the individuals who live in their cities and states. The only thing that matters to them is to see President Trump removed from the White House this November. Wheeler would rather see the entire city burn to ashes than to ask Trump for help.

“I urge you to prioritize public safety and to request federal assistance to restore law and order in Portland,” Wolf wrote in the letter dated Aug. 31. “We are standing by to support Portland. At the same time, President Trump has made it abundantly clear that there will come a point when state and local officials fail to protect its citizens from violence, the federal government will have no choice but to protect our American citizens.”

Portland has seen over three months of nightly violent protests, including three recent killings, as pro-Trump groups and left-leaning protesters have fought in the streets.

According to DHS, as of July 31, local law enforcement has made 255 arrests and declared 23 riots and unlawful assemblies.

“Despite this,” Wolf told Wheeler, “you have stood by passively, arguing that the nightly violence ‘will ultimately burn itself out.’ The evidence demonstrates otherwise.”

It seems that Wolf’s letter is a direct response to the one written by Wheeler at the end of August that was addressed to President Trump. In the letter, Wheeler makes it clear he has no interest in receiving help from the administration, thus proving that politics is more important to this man than the residents he is supposed to be serving.

“Dear President Trump: Yet again, you said you offered to aid Portland by sending in federal law enforcement to our city. On behalf of the City of Portland: No thanks,” Wheeler said in the letter.

“Portlanders are onto you,” Wheeler noted. “We have already seen your reckless disregard for human life in your bumbling response to the COVID pandemic. And we know you’ve reached the conclusion that images of violence or vandalism are your only ticket to reelection.”

Wolf urged Wheeler to reconsider his current position concerning the acceptance of help from the federal government.

“The chaos, destruction, and suffering in Portland are evils you can stop—and must stop. Consider what happened recently in Wisconsin—where the State of Wisconsin requested and received federal law enforcement assistance and the violence and looting there ended.”

Wolf went on to say, “Accordingly, I urge you to prioritize public safety and to request federal assistance to restore law and order in Portland. We are standing by to support Portland. At the same time, President Trump has made it abundantly clear that there will come a point when state and local officials fail to protect its citizens from violence, the federal government will have no choice but to protect our American citizens.”

Sad times in this country when the leader of a city that is being ravaged by miscreants won’t do the right thing and request the help that is necessary in order to bring law and order back to the streets.

People these days care more about their own careers than the livelihood of those in their communities. This is the kind of political climate leftists have created.