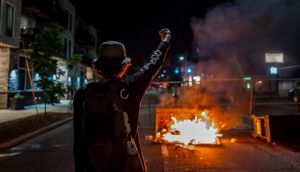 If the ultimate goal of Black Lives Matter is to take their local communities and leave them in a pile of ashes and in utter economic ruin, then I’d have to say mission accomplished.

However, we’re told repeatedly by these folks and their handlers on the left, that these are “protests” meant to end racism. Not sure how destroying property, especially what which is black owned, helps end racism, but hey, they are the “elites,” right? They have to be right…

Well, a developer in Portland said that tons of businesses are fleeing the city in the aftermath of these “protests,” which will leave the city in economic ruin.

Greg Goodman, the co-president of Downtown Development Group, lashed out at Mayor Ted Wheeler and city officials in a letter penned to the City Council in which he described an apocalyptic scene playing out in the streets of Portland on a daily basis.

“I would encourage each of you to walk around downtown Portland in the morning,” Goodman wrote. “Name the time and I will give you a tour. You aren’t sweeping the streets, needles are all over the place, garbage cans are broken and left open, glass from car windows that have been broken out is all over the streets, parks are strewn with litter (their fountains turned off) weeds are taller than the plants in the planter boxes, graffiti is on sculptures, etc. You are willfully neglecting your duties as elected officials to keep our city safe and clean.”

Goodman’s letter noted Airbnb, Banana Republic, Microsoft, Google, and Daimler Chrysler are either abandoning storefronts or development in the city after 87 straight nights of protest that followed the death of George Floyd in Minneapolis police custody on Memorial Day.

“The number is like nothing I have seen in 42 years of doing business in downtown,” Goodman stated. “The list goes on and on. If you know a retail or office broker, give them a call and ask them how many clients they have are trying to leave.”

And as usual, Wheeler deflected and blamed right-wing groups of causing violence over the weekend, instead of taking responsibility for his weak response to the terrorist exploits of the BLM movement.

“I vehemently oppose what the Proud Boys and those associated with them stand for, and I will not tolerate hate speech and the damage it does in our city,” the mayor wrote. “White nationalists, particularly those coming to our city armed, threaten the safety of Portlanders, and are not welcome here.”

No, Ted. The problem is you and your lack of a backbone. Refusing to do what is necessary in order to bring law and order back to your city is what has caused this problem. Refusing the help of the military. Not being willing to be politically incorrect is the problem.

Stop trying to be a people pleaser and actually help the citizens of your city.