Despite Pushback From China, Trump Continues To Unapologetically Use Phrase ‘Chinese Virus’ In Reference To Coronavirus 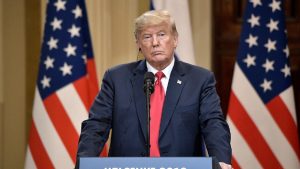 President Trump is not the kind of guy who ever allows the political correctness police tell him what he can and can’t say, which is one of the reasons so many conservative voters love the man.

The president has been taking a lot of heat lately over the fact that he continues to refer to the coronavirus as the “Chinese Virus,” pointing the finger at the Chinese Communist Party for starting this whole pandemic mess to begin with.

This, of course, has China up in arms, who have been putting on a massive propaganda campaign to try and spin this whole thing away from legitimate criticism about the way they’ve handled this fiasco.

Minutes earlier he tweeted: “I will be having a news conference today to discuss very important news from the FDA [Food and Drug Administration] concerning the Chinese Virus!”

Almost simultaneously, China moved to continue its propaganda war over the coronavirus by kicking out a subset of journalists from The New York Times, The Wall Street Journal and The Washington Post whose press credentials would expire before the end of this year.

“The Chinese Communist Party’s decision to expel journalists from China and Hong Kong is yet another step toward depriving the Chinese people and the World of access to true information about China,” the White House’s National Security Council tweeted Tuesday in response to the decision.

The Chinese Communist Party’s decision to expel journalists from China and Hong Kong is yet another step toward depriving the Chinese people and the world of access to true information about China. (1/2)

Secretary of State Mike Pompeo jumped in the ring so to speak when he called People Republic of China Politburo member Yang Jiechi to push back on a tweet posted by the director-general for the Chinese Foreign Ministry’s Information Department. The tweet in question was from Lijian Zhao, who seemed to indicate the United States military is to blame for the spread of the coronavirus. There was no evidence provided to support that claim.

At the end of the day, one has to wonder if now is really the appropriate time to be playing the blame game. After all, we’re in the middle of a health crisis, and folks are panicking like crazy. Right now, all efforts should be put on flattening the curve and calming people down.