Despite Having Majority, House Dems Forced To Choke Down Anti-Abortion Spending Bill Provision 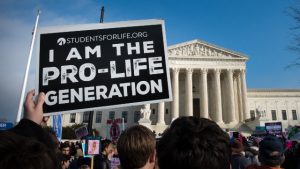 According to new reports, a massive spending deal that needed to pass in order to prevent a government shutdown just so happens to include an amendment that bans the use of federal funds for abortion procedures, despite the Democratic majority making calls to eliminate the provision.

“The omnibus bill unveiled overnight by Democrats includes the Hyde Amendment, a federal policy named for the late GOP Rep. Henry Hyde of Illinois that prohibits the use of taxpayer funds to pay for elective abortion procedures. The policy was enacted in 1976, three years after the Supreme Court’s 1973 Roe v. Wade decision, which legalized abortion nationwide. The provision is not permanent law but has been enacted on an annual basis in various pieces of legislation by both Republicans and Democrats,” The Washington Examiner reported.

To prevent a government shutdown, both Democrats and Republicans agreed to leave some of the more controversial parts of the bill for a debate at a later time.

“In the 1990s, exceptions to the Hyde Amendment were added for cases involving rape, incest, or a risk to the mother’s life. Because the amendment is not permanent law, it must be attached to individual appropriations bills each year to take effect. Supporters of the policy argue it protects the conscience rights of anti-abortion taxpayers who don’t want to contribute to the funding of abortion procedures, while opponents argue the amendment restricts low-income women from a legal procedure,” the report went on to say.

“Progressive activists have increased calls to end the policy. President Joe Biden supported the policy during his time in the Senate but reversed his long-standing position during his presidential campaign, calling for its end,” The Washington Examiner said.

Members of the GOP celebrated the inclusion of the amendment in the legislation.

The Hyde Amendment that protects taxpayers from being forced to fund abortions has been restored.

Pro-abortion activists, however, slammed the Hyde Amendment being included in the bill, going on to make allusions toward a possible Supreme Court decision expected this summer that might either revise or potentially scale back Roe v. Wade.

“We are confident that soon a majority of lawmakers will understand the impact of denying abortion coverage, especially for people of color working to make ends meet,” Morgan Hopkins, interim executive director of campaigns and strategies for All* Above All, went on to say in a statement.

“In a Wednesday Dear Colleague letter, House Speaker Nancy Pelosi did not address the Hyde amendment’s inclusion in the bill. But the California Democrat said lawmakers in her party should take ‘great pride that, today, the House will vote on a historic, bipartisan government funding bill that delivers For The People,'” the WE report continued.

“This legislation will strengthen our national security, bolster our economic prosperity and advance our shared democratic values — and it will follow through on America’s commitment to the people of Ukraine,” Speaker Pelosi stated.