Descendant of Pocahontas Has One Simple Request for “Fauxahontas” Elizabeth Warren 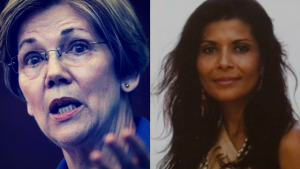 You lie on your Harvard application one time that you’re a Native American and it haunts you the rest of your life.

Of course, Warren has had decades to apologize for appropriating the culture of the native people of North America, but she has consistently doubled-down on her claims of Native American ancestry.

While Warren would like to rely on her “high cheekbones” and her family’s stories, many have called for her to put an end to the whole hilarious debacle and simply prove her Native American ancestry if she’s so darn certain.

The latest person to make this request is none other than a descendant of Pocahontas herself, Debbie White Dove Porreco.

“I respect Sen. Warren as a U.S. Senator,” Porrecto recently told Fox News’ Tucker Carlson. “But I wish she’d take the DNA test,” adding that it would put an end to “a lot of controversy” that has followed the Senator around for years, prompting mockery from even the President, who famously, and hilariously, quipped about “Pocahontas” at an event honoring Native American code breakers from WWII.

“If she was American Indian, I would be the first one to welcome her into our heritage,” Porreco graciously added, who is herself an outspoken Trump supporter.

Porreco isn’t the only person recently calling out Warren–Dr. Shiva Ayyadurai, a native of India, who is challenging her Massachusets Senate seat, has been running with the awesome slogan “Only a real Indian can beat a fake Indian!”