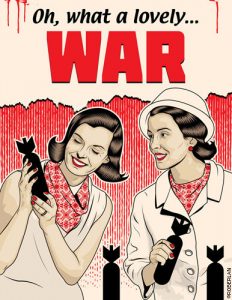 A brief perusal of social media will reveal a number of go-to names and labels that are easily hurled at one another from the opposing sides of the political spectrum. Libtards are at war with the Trumpsters and the ReThugLicans are fighting the Snowflakes. On numerous occasions I too have been accused of hurling insults and labels, however, with the exception of a few parody songs (that you’d do well to enjoy here) I’ve done my best to shy away from them.  I personally do not feel that we can ever gain any progress or find common ground in debate or discussion when our method of operating is reduced to petty playground name calling.  Jokes and attempts at humor are one thing, but when it is your only means of making a point it makes your point look juvenile, unsubstantiated, and shallow.

r discussion when our method of operating is reduced to petty playground name calling.

Just recently I found an article online that contained a game called Trump Supporter Bingo.  The bingo card contained a list of conservative talking points and labels that are used in most current political contexts. The aforementioned snowflake was listed, along with phrases like crooked Hillary, deep state, liberal tears, Seth Rich, Susan Rice, MAGA, travel ban, fake news, CNN, witch hunt, and several others.  While it’s true that many of those terms are often referenced in conservative circles one can’t get very far into leftist dialogue either without hearing about Russia, misogyny, racism, xenophobia, Russia, sexism, redneck,

I’m sure those on the left don’t like being called a snowflake, but we don’t like watching some of you have a nervous breakdown for the news cameras because Donald Trump won the election.  I mean, dude, you needed actual rooms on college campuses where you could go roll around on the floor with each other and find therapy in coloring books.  Did you really think silly behavior like that wasn’t going to illicit some form of funny response from the folks on the right?  In truth, we’d really like to smack some sense into you and tell you to grow up like your parents failed to do. Be happy we settled for the term “snowflake.”

“Oh my God! He just threatened us with violence!” I can hear you cry.

Yawn.  No one has threatened you with violence.  I’m just stating that your parents did you a disservice in your childhood by putting you in time out as discipline, giving you participation trophies, and buying you more video games in order to pacify your crying.  Hey, even they wanted you to shut up!  In fact the only shouts for violence that seem to be heard these days are coming from those that have historically seen themselves as members of the “tolerant” left.  These folks have demonstrated that they are only tolerant when they are getting their way.  Like a petulant child that has never heard the word “No” they feel they must have a tantrum and destroy property when they fail to get everything they expect and want.

Let’s take a look at this phenomenon with a a prime example in Berkeley middle school teacher, Yvette Felarca.  As a member of By Any Means Necessary, a self proclaimed militant antifa group, she was recently arrested in Sacramento, CA for blocking a permitted rally by chasing, hitting and even stabbing members of the rally. There were 14 reported injuries and thousands of dollars in property damage. Not only did one fly over the cuckoo’s nest but it apparently crapped crazy on her head.  Lunacy like this is quite worthy of the scorn it receives.

You can see Felarca in a recent news interview calling for more militant protests here. https://www.youtube.com/watch?v=YPrRLyFTzSU&feature=youtu.be

People like Felarca have grown accustomed to throwing around words like “militant” with seemingly casual ease and obviously no real understanding of what words like that mean.  What she really means is more vandalism.  Being militant isn’t just breaking windows and starting fires. To be militant means that you want to become more combative resulting in violence. Felarca and her gang seem to have taken it to that level in Sacramento recently, but I assure you that behavior will not be tolerated in most of hard-working, blue collar America.  Pushed to the limit, there will come a time when violence, unfortunately, will be met with violence and insults, slurs, and name calling will no longer be the only weapons used. She would do well to remember the words of her savior Barrack Obama,“If they bring a knife to the fight , we bring a gun.” There are a lot of folks out there that have known that mantra for a long time. Step lightly, sister.

My encouragement to those of you reading this would be that we take the time to study and show ourselves prepared for debate.  Remember debate?  How bout conversation and discussion? Are Americans that feel passionately about their country’s future any longer capable of such concepts? Calling our opponents names will not sway the audience that is listening to our point of view.  As conservatives we would do well to know why we believe in the things we do rather than simply blaming Obama or screaming Make America Great Again.  I blame Obama for a number of things. I know what and I know why. I’m fully prepared to discuss them. The same can be said for George W Bush and Bill Clinton.  It may shock you to know that I also blame President Trump for a number of things as well.  As a Trump supporter that believes he is working hard to bring great things together for the benefit of our country I hate the fact that he did indeed say certain sexist things over a hot mic. It’s indefensible. It’s hard for me to help in defending and supporting your just and worthy causes when I have to spend the majority of my time overcoming your past indiscretions. His need to fight back via Twitter at every thing thrown his way is often undignified and is another thing I’d rather not have to discuss. I understand the importance of the President using social media to disseminate his views, but that is not what I’m referring to here.

I still believe that Donald Trump is good for this country.  He is a man that is absolutely untouched by the demon of political correctness and he is completely beyond intimidation by the media or public opinion.  He has surrounded himself with wise counsel, men and women of similar strengths and resolve.  Those on the left would immediately call me crazy, racist, sexist, or xenophobic yet they would have zero evidence with which to back up such claims.  Their only excuse is that I support the president of the United States and for them that is simply unthinkable. But here is what’s interesting…beyond the name calling and the accusations…I’m prepared to have honest discussion, even debate, as to WHY he has my support.  I hope that you are ready as well.