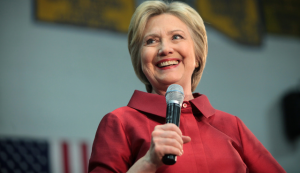 Former Democratic presidential nominee Hillary Clinton recently gave an interview at the Atlantic Festival where she despicably compared Russian interference in the 2016 election to the 9/11 terrorist attacks that left 3,000 people dead.

To say Clinton lacks decency and tact would be an understatement of near biblical proportions.

Clinton addressed a variety of topics in her on-stage interview with Atlantic editor-in-chief Jeffrey Goldberg, recycling a handful of excuses for her loss and accusing President Trump of embracing “white nationalism.” She also seemed to accuse the Trump campaign of taking part in an international “Vast Right Wing Conspiracy” to alter election results — a conspiracy that Special Counsel Robert Mueller’s own year-long investigation has found no proof of.

“I believe that the combination of the Russian campaign, the WikiLeaks being the cutout for Russian stolen information, the role that Cambridge Analytica and other organizations like that played in connection with the Republican apparatus, the [Republican] National Committee and other allies and the Trump campaign certainly altered the outcome in enough places that we have to ask, ‘What really happened?’ ” she replied.

But the Democratic mainstay shocked even The Atlantic’s audience when she launched into an extended comparison between the the Al Qaeda attack on New York City and Washington, D.C. that claimed thousands of lives, and Russian hacking.

“What we know now is incredibly troubling … we have been attacked by a foreign power and have done nothing,” she said.

“It would be like — I can’t even imagine — I mean, it’s a horrible example, but after 9/11, [if] George W. Bush said, ‘Well, I don’t have time to meet. I don’t have time to worry about this. It was terrible. We feel sorry about it. We’ll rebuild New York and the Pentagon, but we’re not going to worry about it.’ Well at a certain point, that’s what this is turning into. The evidence continues to accumulate,” Clinton added.

Yes, Mrs. Clinton, that is indeed a horrible example, an awful comparison that you never ever should have made.

This is the same lady who had the gumption to say that individuals supporting Donald Trump were deplorable? Really? Don’t recall any of them making such a heinous and belittling comparison about the loss of 3,000 American lives.

This is just further proof that we were blessed by Clinton losing two years ago.