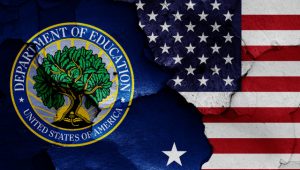 The United States Department of Education has decided to walk back its plans to encourage the use of critical race theory in civics education curriculum.

The scale back comes after several months of activism against the liberal progressive ideology led conservatives. The teaching itself alleges that white folks and racial minorities in the U.S. belong to the oppressor and oppressed classes.

The Washington Post reports, “The department published a notice Monday in the Federal Register requesting applications for grants that dropped references to published anti-racism works that had been mentioned in proposed rules released in April for the American History and Civics Education grant program, and that had drawn the ire of conservatives.”

“The proposed rules did not actually suggest the contested material would be required for grantees to use, but Education Secretary Miguel Cardona addressed concerns of critics by making clear in a blog post that curriculum decisions will not be dictated by the federal government,” the report continues.

The April proposal lauded The New York Times’ “landmark” 1619 Project — which emphasizes the role of slavery as a core reality in the founding of the United States — and quoted from How to Be an Antiracist by Ibram X. Kendi. The new notice dropped both references and appeared to avoid any other nods toward critical race theory.

“Thousands of Americans across the country responded to the federal government’s request for comment on this issue, and sent a clear message that this was not an appropriate use of tax dollars,”  Parents Defending Education President Nicole Neily went on to say. “We are gratified that the Biden Administration has responded to this feedback.”

“Today’s decision is a win for the parents and students,” Senate Minority Leader Mitch McConnell added. “Future generations of Americans deserve to receive a rich, rigorous education in civics and our nation’s history. But this will hardly be the last word in the fight to preserve real history and real civics in the face of the revisionism that is increasingly sought by the far left.”

Earlier in the month of July, an African-American father named Ian Rice went on to explain to his kids’ school board that CRT seeks to teach children that “white people are bad.”

“That’s not true,” he proclaimed. “That would teach my daughter that her mother is evil.”

“This board and this school district has failed,” Rice said directly to the administrators. “[Critical race theory] was never meant to be brought into grade schools, high schools — at all. It’s actually taught in the collegiate atmosphere, more importantly, the legal portion of the collegiate atmosphere to see different laws through the lens of race, from an ethical standpoint, not for grade schoolers and high schoolers.”

Rice then went on to point out that racial tension in America is “nowhere near what they used to be decades ago,” though the country still has “a long way to go.”

“But I believe the people here don’t look at me as a black man, they look at me as a man standing in front of you addressing the issue we are all very passionate about,” Rice said in conclusion to his statement. Those in attendance gave raucous applause for Rice’s words.