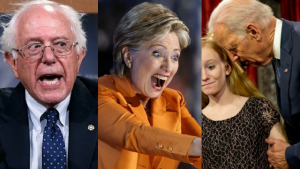 I just have to take a moment to thank the Lord Almighty for this week’s news cycle, particularly considering the dumpster fire that was the previous week. He is a merciful God, people, He truly is.

This week has been full of great news for conservatives from three significant Supreme Court Victories right up to the fantastic news that Justice Kennedy will be retiring, meaning Trump will get another Supreme Court pick, tipping the seats to at long last the right.

If Hillary had been elected, she would have had two picks to fill with fellow radical leftists, so this is yet another reminder of the size of the bullet we dodged in 2016.

Speaking of 2016, Dems are scrounging together possible Presidental nominees for 2020, which is so far proving to be hilarious. If their top choices are any indication, we can feel pretty confident about Trump 2020.

If you thought this week could not possibly turn out more wins for conservatives, think again! According to a new poll, the Democrats’ best hopes for 2020 includes twice-failed candidate Hillary Clinton.

According to The Hill, former Vice President Joe Biden took the top spot in a Harvard CAPS/Harris poll from this month, with 32% of the vote. But, there she was: Hillary was named the Democrats’ second best option, with 18%.

And from there it was another familiar name: Vermont socialist Bernie Sanders, who lost to Hillary during the primary and is now 76 years old, came in third, with 16%.

The only other Democrat garnering double digits in the poll was Massachusets Senator Elizabeth Warren, known on the right as “Fauxcahontas,” taking 10%. Warren has been plagued with mockery for allegedly faking Native American ancestry to advance her career at Harvard. Oh, and she happens to have even less charisma than Hillary.

The Democrats have definitely been having an identity crisis, as they battle out the conflicts between their proclivity for far-left rhetoric that alienates voters and their desire to, you know, actually win elections.

This conflict has been seen in full play this week as Democratic leaders like Chuck Schumer and Nancy Pelosi have (to their credit) been forced to denounce a recent call by Maxine Waters to harass Trump administration officials in the street.

Democrats have a hard time balancing their unquenchable thirst for power and their pathological opposition to everything Trump does or says with their ability to connect to their base and, dare I say, attract new voters.

At this rate, the outcome of 2020 is looking pretty dismal for Democrats. Which, of course, means more good news–and a lot more winning–for us!