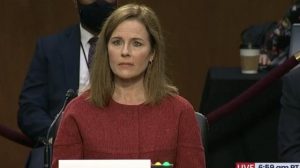 Liberals are totally desperate to see Judge Amy Coney Barrett go down in flames, which means they are frantically attempting to find something to nail her to the wall for in order to sway folks in the Senate from confirming her to the bench of the Supreme Court.

Their assault of choice?

Attacking her for using the phrase “sexual preference,” claiming it’s an “offensive” term.

Let me make clear – sexual preference is an offensive and outdated term.

To suggest sexual orientation is a choice? It's not. It's a key part of a person's identity.

The LGBTQ+ community should be concerned with #WhatsAtStake with Judge Barrett on the Supreme Court. pic.twitter.com/4TWyATMX0Y

What is so ironic about the outrage over the use of this term is that current Democratic presidential nominee Joe Biden used it back in May during a roundtable discussion with African-American representatives held in Florida.

America’s the only nation in the world that when we’ve gone through a major crisis, we’ve almost always been able to come get through it and come out stronger. I’m hopeful. I’m going to need you if we win. I’m going to need you to help this time rebuild the backbone of this country, the middle class, but this time bring everybody along regardless of color, sexual preference, their backgrounds, whether they have any … Just bring everybody along.

The Left said Amy Coney Barrett was bigoted because she used the term "sexual preference."

Here's Joe Biden using the same term in May. pic.twitter.com/u7k4MqHCSU

The Washington Post admitted, “Plenty of figures on the left — including Democratic presidential nominee Joe Biden and the late Justice Ruth Bader Ginsburg, whom Barrett is hoping to replace on the high court — have also used the phrase, which was considered acceptable as recently as a decade or two ago.”

The Washington Free Beacon released a video of Biden, other Democrats, and Ruth Bader Ginsburg using the term “sexual preference”:

Barrett later apologized for using the term “sexual preference,” asserting, “I certainly didn’t mean and would never mean to use a term that would cause any offense in the LGBTQ community.”

Take a deep whiff of the air, ladies and gentlemen. Smell that? It’s fear. Democrats are scared to death of Amy Coney Barrett getting confirmed before the election. With no way to bring sexual assault charges against her, they’re trying to shame her for her faith, for her lifestyle, and for her choice of words.