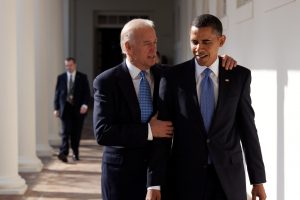 President Barack Obama walks with Vice President Joe Biden along the Colonnade, Feb. 3, 2010. (Official White House Photo by Pete Souza) This official White House photograph is being made available only for publication by news organizations and/or for personal use printing by the subject(s) of the photograph. The photograph may not be manipulated in any way and may not be used in commercial or political materials, advertisements, emails, products, promotions that in any way suggests approval or endorsement of the President, the First Family, or the White House.

I can’t even with the double-standard, guys.

Creepy Uncle Joe has been one of the handsiest dudes in Washington DC for years know, and we’ve got the photos, memes, and video collages to prove it.

No one is remotely surprised that someone from his own side finally decided to call him out for being a creeper, particularly because he has been flirting with a presidential with the same breathy enthusiasm he smells women’s hair or feels them up during photo ops.

But you see, he’s a Democrat, so no one ever cared before he posed a threat to the lesser-known 2020 contenders who would rather get handsy with our personal liberties than with fellow lawmakers or the female family members of newly sworn-in members of Congress.

Are we really still buying this in the #MeToo era, when feminists have imposed Victorian social standards on all straight white men (when it suits their agenda, at least)?

On Morning Joe, co-host Joe Scarborough stated, “Mika, what do you think? I know you weren’t incredibly pleased by what you saw this weekend in the attacks on Joe Biden.”

Brzezinski responded, “Well, I think this is a very extensive and careful conversation that we need to have … There’s a lot of things I know about Joe Biden– I’ve known him for a long time — he is extremely affectionate, extremely flirtatious in a completely safe way. I am sure that somebody can misconstrue something he’s done. But as much as I can know what’s in anyone’s heart, I don’t think there is bad intent on his part at all. I read the account, and I was like, (laughing) ‘Yeah, that’s Joe Biden,’ but never thought for a second he meant anything from it except to be nice, to be kind.”

Scarborough, seemingly implying that inappropriate behavior done publicly was somehow different from that being done privately, added, “We’ve seen it, Mika, on television, again, she’s describing a lot; we’ve had clips of him and late-night comics have had clips of him; he is always been very expressive and he’s always been very expressive in public. It’s not like he’s hiding anything.”

Again…really? Last I checked, whenever a woman is made to feel uncomfortable by a man touching her without invitation, it was considered assault.

Now suddenly all the lectures we have received over the last two years are null and void because homeboy is running for President?

No. Not cool. This dude is an obvious creeper and I have been reliably informed that we are to believe all women.