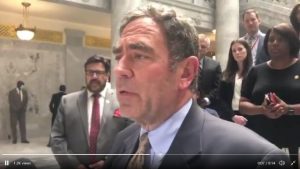 Democrats in the Utah House of Representatives walked out as a form of protest on Wednesday as the chamber was discussing a new resolution that rebuked critical race theory, a Marxist system of thought that is currently dividing the country.

The walkout, however, provided an opportunity for Republicans to unanimously adopt the resolution which urges the state’s Board of Education to ensure that “certain concepts” that are associated with critical race theory are not taught in the classroom.

The resolution includes concepts that “one race is inherently superior or inferior to another race” and that “an individual’s moral character is determined by the individual’s race.”

House Speaker Brad Wilson, a Republican, said in a statement that the resolution is meant to “ensure [Utah’s] public schools teach the important issues surrounding race in our country in a respectful, appropriate, and open-minded manner.”

Democrats also objected to a separate resolution passed unanimously by Republicans, which declared the Legislature’s support for the Second Amendment and for the idea of exploring whether to designate Utah as a Second Amendment sanctuary state.

Democrat State Rep. Brian King went on to say that Democrats were “excluded from the process to such a significant degree” with the two pieces of legislation, stating, “We feel that the most eloquent way we can speak and the way that we can raise our voices the loudest is to walk out and not be a part of that sham process.”

Breaking: Dems in Utah House walk out on #CriticalRaceTheory and gun legislation, say they were “left out” over resolutions. pic.twitter.com/vgjeFXor14