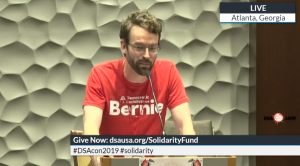 Nestled in among the weekend’s far more sobering news stories was this hidden gem that, if you ask me, demonstrates why the social justice warrior brand of leftism is a dead movement walking: it’s impossible to function, let alone accomplish anything, when everything around you is a trigger.

According to Fox News, the Democratic Socialists of America (DSA) National Convention took place in Georgia over the weekend. Now, that in itself sets a writer up for comedy gold, as you can see the organization’s constitution and bylaws are hilarious in themselves, not to mention the description of hyper-PC amenities for the convention such as “quiet rooms” and “chestfeeding rooms.”

The main attraction itself, however, devolved into insanity when delegates began complaining, rather angrily I might add, about the use of gendered pronouns and phrases and, brace yourselves, too much whispering and chatter.

“Uh, quick point of personal privilege, um guys,” began a delegate who identified himself as James Jackson from Sacramento and specified that he uses the “he/him” personal pronouns.

Meanwhile at the Democratic Socialists of America conference… pic.twitter.com/fT0GfHIFFI

“I just want to say, can we please keep the chatter to the minimum? I’m one of the people who’s very, very prone to sensory overload,” Jackson said as the room erupted into silent “jazz hands” applause.

“There’s a lot of whispering and chattering going on. It’s making it very difficult for me to focus,” he added. “Please, I know we’re all fresh and ready to go, but can we please just keep the chatter to a minimum? It’s affecting my ability to focus.”

Anyone else watch that and think, “man, this dude wouldn’t last one second in basic training, let alone combat”? No, just me? I digress.

“Thank you, comrade,” the chair responded.

Little did Jackson know that in spite of his own expressed sensitivity to preferred pronouns, he went and said the worst thing anyone could possibly imagine to a mixed audience. He called them “guys!” The audacity!

“Please do not use gendered language to address everyone!” he shouted (because it sounds like either a man or a woman with a mouth full of marshmallows, and those are the only two genders I work with.)

“OK,” the chair said, starting to get a little nervous at the chaos beginning to unfold.

Shortly afterward, Jackson came back for another shot:

It gets better, triggered anxiety comrade has another meltdown. Lmfao pic.twitter.com/lljr4tF0yV

“I have ALREADY asked people to be mindful of the chatter of their comrades who are sensitive to sensory overload,” Jackson said, using a volume and tone of voice that I personally find aggressive and triggering.

“And that goes DOUBLE for the heckling and the hissing. It is also triggering to my anxiety,” Jackson says, seemingly aware of the fact that he’s acting like a toddler, yet trodding onward in his demands of the group. “Like, being comradely isn’t just for like, keeping things civil or whatever. It’s so people aren’t going to get triggered, and so that it doesn’t affect their performance as a delegate.”

This is serious, y’all. Being comradely saves lives.

Jackson’s brain finally short-circuits when, in the course of affirming his fellow delegates’ need to “express” themselves, he blurted that their need does not “trump” his own personal needs. Having just uttered The Dark Name, not knowing how horribly he has just triggered his fellow comrades by the mere use of the word “trump,” Jackson begins sputtering and stammering before the clip ends and he presumably slithers back to his seat to weep into his tall soy latte.

Oh, but that’s not all, folks!

While DSA hilariously deleted all videos of this session from YouTube (can we blame them?), the People of Twitter™ saved some more clips of the carnage, including a member giving a quick run-down of the convention rules, which included a prohibition on “aggressive scents” in the quiet room:

I’m sorry, I thought this was America.

Human Events editor Ian Miles Cheong also snagged this clip of a delegate from New York objecting to the “tactical” use of the term “democratic” in “democratic socialists” as a way to “market the socialist ideology to Americans.”

That’s about all I can handle, folks. This is just too much.

At least we can rest easy knowing that these folks can barely hold an assembly without triggering themselves into a hissy fit.