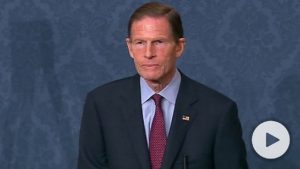 Democratic Sen. Richard Blumenthal handed out a warning of “consequences” if the GOP moves forward with the confirmation of Judge Amy Coney Barrett to the Supreme Court on Monday, as many in the Democratic Party continue to discuss an attempt to put forward court packing or possibly eliminating the Senate filibuster if she is seated.

These folks are a bunch of whiny children, aren’t they?

Blumenthal, D-Conn., was one of a parade of senators to hit the floor on Sunday night and Monday morning ahead of a likely confirmation vote on Barrett Monday evening. In remarks that ran over 40 minutes, Blumenthal touched on issues ranging from health care to abortion to a request he made for Barrett to recuse herself from any election-related cases, which Barrett declined.

But twice Blumenthal alluded to potential retaliation from Senate Democrats if Republicans succeed in seating the circuit court judge and Notre Dame law professor on the highest court in the land.

This is just more intense fear mongering by the radical left who are attempting to use the only weapon they have against ACB, which is to paint her up as a radical from that dumb Hulu show, “The Handmaid’s Tale.” They continue to speculate on how she’ll rule on certain cases, though she herself has stated that she’s a strict originalist and thus, much of what they think she’s going to do isn’t necessarily the case.

Republicans need to seat ACB. If Democrats try court packing in the future, it will be to their own undoing.