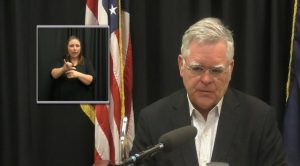 Democratic Nashville Mayor John Cooper announced on Thursday that he’s placing a ban on gatherings, both indoor and outdoor, of more than eight people during the week of Thanksgiving.

Ladies and gentlemen, if you want to know what tyranny looks like, this is it. This man is actually trying to tell his constituents how many people they are allowed to have in their homes to celebrate a holiday.

Cooper explained during his weekly news briefing the city’s new “Rule of 8,” which goes into effect Monday and limits gatherings to eight people “whether you are at a restaurant or your backyard,” according to the mayor’s office.

Limit public and private gatherings to 8 people. Record COVID hospitalizations are straining hospitals. Restricting social contacts is critical to stopping the spread of COVID. Please reconsider any plans to gather with people outside of your household, including Thanksgiving. pic.twitter.com/FmGklCf8FU

“The virus does not care whether you’re in a public space or private space, so we need to be just as good in private as we are in public,” Cooper said.

“The Rule of 8 needs to be our guide as we enter the holiday season. It should prompt everyone to think with caution when inviting friends over for dinner or going to a baby shower or hosting a game. It’s critical we limit our social contacts to eight, or to one other household at most,” Cooper continued.

Gatherings that have more than eight people must be approved by the Metro Public Health Department. If you opt to not obey this order, you’ll be subjected to a citation.

Are people really going to put up with this crap? This is insane. What makes 8 such a magic number for not spreading COVID?

This is an illness with a 99 percent survival rate, but you’d think it was knocking people off like Ebola. We’ve been at this for almost a year now. It’s time to accept the fact that maybe, just maybe, we aren’t going to be able to really staunch the spread of the virus.

Enough of the fear mongering. Let us live our lives, people.