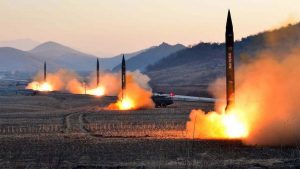 If you frequent gun rights Twitter, there’s a good chance you’ve seen the exchanges between U.S. Rep. Eric Swalwell and gun rights advocates as of late on his highly controversial plan to buy back all semiautomatic “assault rifles” and prosecute anyone who doesn’t comply.

There is good reason for this, of course, as Swalwell’s plan is nothing short of complete and total tyranny, if you’re one of these old-fashioned type of people who believes in a little ol’ thing called the Second Amendment.

Even if you fantasize about making criminals out of millions of law-abiding gun owners, however, most sensible people would admit that it’s not very feasible.

Swalwell, who seems confident his plan would move forward easily and apparently lives in a dimension where America wasn’t founded on the concept that the people should be empowered to arm themselves to protect against tyranny, joked when asked how he proposed to go after non-compliant firearm owners that, well, the government “has nukes” so the war would “be short.”

This was an open admission that it would take nothing short of an act of extreme violence against the American populace to enforce his insane plan, but since reasonable everywhere were understandably shocked he’d suggest that the government would carry out a nuclear war against its own citizens, this “joke” has gotten quite a bit of attention.

To which Swalwell, instead of back away and try to politic his way out of such a crazy statement, has actually doubled-down that he was totally just joking, guys.

Well this should end the faux-outrage from gun groups. @snopes DEBUNKS @DailyCaller and others who claimed I made serious threat to nuke gun-owners.

Let’s move on to what really matters: ensuring our right to be safe is paramount. #EnoughIsEnough https://t.co/nabjYSySmv

“Well this should end the faux-outrage from gun groups. @snopes DEBUNKS @DailyCaller and others who claimed I made serious threat to nuke gun-owners,” he wrote.

Except that Snopes didn’t debunk his claim, but rather called the claim a mixture of true and false.

The “fact-checking” site said of the statement: “In November 2018, Democratic U.S. Representative Eric Swalwell suggested launching nuclear weapons against gun-owners who refused to hand over or sell semi-automatic rifles to the U.S. government” that it was a “mixture” of true and false.

“In a tweet on 16 November, Swalwell responded to a gun rights enthusiast who said the Democrat’s proposal to confiscate or buy semi-automatic rifles would result in ‘war’ due to resistance from gun owners, stating ‘it would be a short war’ because ‘the government has nukes.’”

Then Snopes just repeated Swalwell’s claim that it was “no more than a joke.”

The origins came from Swalwell’s opinion column for USA Today where he demanded a ban on “military-style semi-automatic assault weapons,” and said the government should buy such guns and prosecute those who wouldn’t hand them over.

Snopes explained Swalwell’s tweet, with the threat, “was undoubtedly authentic.” It added, however, “he quickly clarified that he had intended his reference to nuclear weapons to be a joke.”

Again, joking or not, Swalwell inadvertently addressed the biggest issue with any attempt to confiscate guns from the American people en masse, which is precisely the reason our Founding Father saw fit to articulate our natural right to keep and bear weapons.

As Conservative Review explains, however, in a way Swalwell’s audacity is refreshing:

It’s easy to point out how insane it is that a sitting member of Congress is talking about confiscating the property of American citizens and using nukes against those who don’t comply, because it’s pretty insane. Whether or not you believe his claims of being facetious is up you.

But it’s also nice to see an anti-gun politician take the mask off for a moment to remind us what the debate about the Second Amendment is really about and why 2A exists in the first place. The talk about gun control is around these mythical ‘commonsense’ laws that we can put in place that will supposedly make Americans safer through further firearms regulation. ‘We don’t want to take your guns away,’ the argument goes, ‘we just want some common sense.’

Nothing about Swalwell’s plan, joke or no, has anything to do with “common sense.”