Democrat Senators Asked If They Support Removing George Washington Statues. All Of Them Refused To Comment. 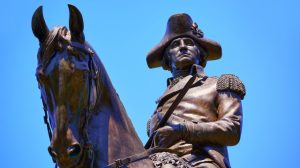 The latest, hottest form of liberal protest in the battle against all things that white people find offensive is the removal of statues, particularly ones that reflect any sort of connection to slavery or the Confederacy, both of which are critical parts of our nation’s history, despite the ugly warts and blights they put on it.

The Daily Caller called up every Democratic senator currently serving the United States and asked them whether or not they would support the removal of statues of George Washington, the father of our nation, and without a doubt the greatest president this nation has ever known.

Not a single one of them really answered the question.

One senator, Tammy Duckworth from Illinois, recently said she supports a conversation on removing such statues.

She added during the interview, “I think we should listen to the argument there. But remember that the president at Mount Rushmore was standing on ground that was stolen from Native Americans who had actually been given that land during a treaty.”

This has to be the dumbest and most ineffective means of fighting against racism ever concocted. Removing statues does nothing. The only reason top Democrats are so supportive of this kind of thing is because it enables them to create revisionist history that will better suit the spread of their own values through the public education system, creating loyal lemmings out of future generations of Americans.

Make America out to be the bad guy and the progressives the good guys. It’s a simple narrative shift, and it’s a tool that’s very effective.