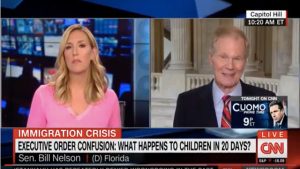 Democratic Sen. Bill Nelson said on Thursday that Democrats would give President Donald Trump funding for his border wall, but there’s a catch, and it’s honestly a pretty big one, something many of his supporters likely will not want him to back.

Nelseon sad that funding would be given for the border wall if it is part of a larger immigration package.

With immigration again a hot topic after the uproar over the Trump administration enforcing separation of illegal immigrant parents from their children at the border, Nelson told CNN he wanted “comprehensive immigration reform” that included addressing that problem for good.

CNN host Poppy Harlow asked Nelson what he was willing to give in exchange, such as whether he would vote for a bill allocating funding for a wall.

“We already agreed to that back six months ago to solve the DACA problem,” Nelson said.

“So you will?” Harlow asked.

“If that were on the table, and the question is how much—that’s another issue—if we could solve DACA and we could solve this reunification of families and don’t keep children past 20 days, if we could put all of that and solve the Dreamer issue, yes, as we did before six months ago,” he said. “We’d give on the wall. But not some outlandish figure.”

Immigration is an important issue with our nation’s sovereignty at its core, therefore it’s crucial to make sure we do what we can to both protect our national security, our resources, and our people, all the while making it possible for the best folks from around the world to have access to our nation legally.

Many ideas offered by both sides carry a bit of unpleasantness, so there’s no way we’re going to come up with a solution that makes everyone happy. All we can do is hope the law of the land is somehow upheld with minor tweaks to improve the system overall.