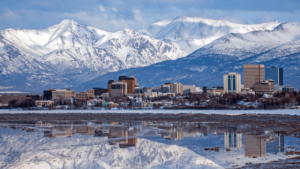 And they made fun of Sarah Palin for saying you could see Russia from Alaska. This Democrat has never even been to Alaska and is trying to convince voters she’s got their best interest in mind as she runs for one of their House seats.

I’ve watched enough Alaska State Troopers to know that Alaska is definitely a pretty unique state, but you’d have to be crazy to run for a House seat in any state in the nation without ever even having visited.

But Carol Hafner, who has no plans to campaign in the state, apparently thinks a Twitter campaign is enough.

Apparently, carpetbagging in the 21st Century no longer requires a carpetbag.

“Don’t lock me out just because I’m not a homeboy,” Hafner told the AP, adding: “You ought to be thankful that I care enough and I’m interested enough and passionate enough to want to make things better.”

She also said she wants “to do good in a place that I feel a kinship for.”

Hafner can legally run in Alaska despite not living there or even visiting, but she is unlikely to win the November election against Republican incumbent Don Young, even if she survives the Democratic primary. The U.S. Constitution stipulates that candidates have to live in the state they are running in at the time they are elected, but there have been some exceptions.

For example, a New York man ran against then-Sen. Mark Begich in Alaska in 2014 but was soundly defeated. And an Arizona man ran against Rep. Cynthia Lummis in Wyoming that same year, and also lost.

For her part, Hafner is just focusing on a social media campaign, hoping Twitter can win her the election instead of good old-fashioned human contact.

She may feel she has a “kinship” for Alaska, as she told the AP, but if she can’t even be bothered to visit the state to campaign, she likely won’t be able to convince many Alaskans of her authenticity.

Yeah, I would imagine not! If Democrats are really this desperate to regain their majority in the House, you think they’d at least be willing to spring for some plane tickets.