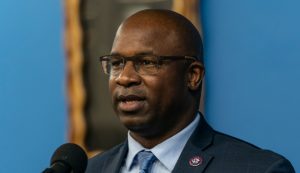 Because everything is about race with the radical left. There’s nothing a person can do to ever appease the woke crowd. Nothing. So why bother trying? It’s futile.

“It’s tremendously frustrating for me as a black man in America,” Bowman went on to say to CNN during the interview, transforming the spending bill into an issue about race from his perspective.

Bowman then went on to add that he thinks Manchin’s concerns were driven by money instead of supporting people of color.

Because, once again, if you don’t get on board with whatever the consensus of the Democratic Party says, you’re a racist.

“It went from 3.5 trillion to 1.75 trillion [dollars] because of him, his special interests, his donors, and lobbyists were cutting the bill for several months, because they did not want this bill to pass,” the congressman said.

“Why? Because this bill disproportionately supports people of color. It supports women. It supports children. It supports those who are poor and lifts them out of poverty. Why wouldn’t Manchin want to support that when this would benefit West Virginia tremendously?” Bowman asked.

“Wow @Sen_JoeManchin, with all due respect, when you say you’re a no on Build Back Better – is it you? Or is it the special interest 💰💸 that powers you?” he posted in a tweet.

“I’m inviting you to my district to see just how badly we need this bill. Will you tell my community ‘No’ to our face?” he then said.

Wow @Sen_JoeManchin, with all due respect, when you say you’re a no on Build Back Better – is it you? Or is it the special interest 💰💸 that powers you?

I’m inviting you to my district to see just how badly we need this bill. Will you tell my community “No” to our face?

Just as Senator Manchin reversed his position on Build Back Better this morning, we will continue to press him to see if he will reverse his position yet again, to honor his prior commitments and be true to his word.

In the meantime, Senator Manchin will have to explain to those families paying $1,000 a month for insulin why they need to keep paying that, instead of $35 for that vital medicine. He will have to explain to the nearly two million women who would get the affordable day care they need to return to work why he opposes a plan to get them the help they need. Maybe Senator Manchin can explain to the millions of children who have been lifted out of poverty, in part due to the Child Tax Credit, why he wants to end a program that is helping achieve this milestone—we cannot.

If Joe Manchin does not have the guts to stand up to the powerful special interests, he's going to have to explain that to the people of West Virginia who are hurting and hurting badly. pic.twitter.com/U5OeNlk6ea