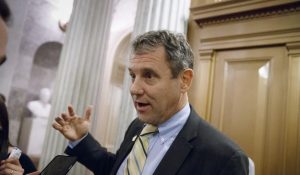 Amazing what can happen when the shoe is on the other foot.

The Democratic party has been treating us to a neverending chorus of “believe all women!” and “we believe Dr. Blasey-Ford!” ever since the aforementioned professor dropped her last-minute claims against now-Justice Kavanaugh in the final days of his Supreme Court nomination.

They balked at the idea that the unsubstantiated claims of attempted assault at an unspecified place some time in the early 1980’s were a “character assassination” of the well-respected federal judge, but when one Congressional candidate was recently hit with his own unsubstantiated accusations, suddenly that phrase came in handy.

Because that’s exactly what he’s claiming has happened to him.

Democratic Sen. Sherrod Brown of Ohio has been accused via a news release from his opponent, Republican challenger for Senate Rep. Jim Renacci’s campaign, of “an unexpected, uninvited, unwanted, and sudden advance” on an unnamed female, “roughly pushing her up against a wall.”

Oh, and it was sometime in the late 1980’s, at an unspecified place, and there’s no corroborating evidence.

Sounds an awful lot like what Kavanaugh was accused of right?

Attorney Laura Mills, an attorney, and former business partner and friend of Renacci said she was put into contact with the woman who is described as “very credible” and a “professional woman.”

Here is Mills’ summary of the claim:

She met Sherrod Brown in the course of her work and had occasion to be briefly alone with him, but not on a date. She told a friend in confidence about her unwanted and unexpected experience in the late 80’s. This was months ago, shortly after the MeToo movement began, and the reason she told her friend was to explain why she believed many of the women, as something unwanted had happened to her with a prominent politician. She had no intention of coming forward and did not know that the friend would later contact Jim Renacci with it. When she did, he referred her to discuss the experience with me.

This encounter happened after his divorce. She described an unexpected, uninvited, unwanted, and sudden advance, roughly pushing her up against a wall. It did stop after she expressed dismay and very firmly pulled away, explaining that was not her style nor why she was there. He then said he remembered what she had on the day they had met some time earlier and that he had been attracted to her. Although she was able to defuse the situation, it did shake her up and she told friends about it as soon as she got home. They wanted her to report it but she chose not to do so because it did stop. She has also told a few other people over the years about what a shock it was, but did not intend to ever bring it forward recently other than to let friends know this is why she believed many other women’s stories about similar experiences. And also it happened a very long time ago. She is only allowing this statement because the current news coverage does not have all the facts yet, and she wants to correct the record.

Additionally, as Cleveland.com reports, Mills’ release “comes a day after Renacci told reporters and editors with the Cincinnati Enquirer that he’d heard from ‘multiple women’ with abuse allegations against Brown while providing no additional details or supporting evidence.”

Brown clearly doesn’t have a Senatorial Temperament, because he’s actually had the nerve to deny these unsubstantiated, vague, anonymous allegations.

Legal representation for Brown called the allegations part of a smear campaign from a “failed and desperate candidate,” and released this statement:

Just hours after a cease and desist was sent to Jim Renacci informing him that if he chose to continue making unsubstantiated and false claims about something that never happened he would face legal ramifications, now Jim Renacci’s former business partner and friend, in coordination with Renacci’s campaign, has put out a statement with nothing more than further anonymous and unsubstantiated claims. Pure and simple this is character assassination by a failed and desperate candidate who every day reaches new lows. This will not be tolerated, all legal means will be pursued against Jim Renacci.

So…is it only Democrats that are always well-intentioned when they claim a Republican has sexually assaulted someone…?

And yes, since you asked, since Brown is a sitting Senator, he did weigh in on Blasey Ford’s testimony. He had already decided to vote against Kavanaugh before she came forward with her vague, uncorroborated, and inconsistent allegations, but he still thinks her testimony was “powerful.”

While I had already decided not to support Judge Kavanaugh based on his history of siding with corporations and Wall Street over workers, Dr. Ford’s testimony today was a powerful moment for our country. -SB