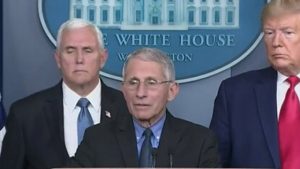 Democratic Sen. Ed Markey wants to ensure that Dr. Anthony Fauci, one of the top members of the White House coronavirus task force doesn’t end up getting booted by President Trump over “political reasons” thus, he’s introducing a bill to help prevent that from happening.

Markey announced the proposal on Tuesday, which came as a response to President Trump retweeting someone who called for Fauci to be fired after blaming the slow response of the government to COVID-19 on the current administration, throwing the president under the bus on public television.

When the administration was asked whether or not the president had any plans of kicking Fauci to the curb, the White House fired off a scathing reply that said the president has no such intention.

Here are more details from The Washington Examiner:

The bill, if passed, would prevent the president from firing a director of any national research institute or national center under the National Institute of Health “on the basis of malfeasance by, neglect of office by, or incapacity of the director.”

“Trump has an allergy to both — science and the truth. Our response to the coronavirus crisis must be based on science, on data, and on the truth. We cannot allow Donald Trump to silence Dr. Fauci or any other government scientists,” Markey said in a statement titled “Senator Markey to Introduce Legislation to Protect Dr. Tony Fauci, Research Institute Heads from Politically-Motivated Termination.”

Markey went on to say that helping to educate people on the facts surrounding this horrific illness should be about saving people’s lives and that should never be considered a firing offense.

On Monday, Fauci addressed the statements he made on CNN and MSNBC, noting that his use of “pushback” was “the wrong choice of words.” He also stated that this retraction was not due to pressure he was receiving from the Trump administration.

This whole crisis is being co-opted for the sake of politics, which is the last thing we need right now. Let’s stop that nonsense and focus on getting over this virus and reopening the economy so people can get back to living their lives.