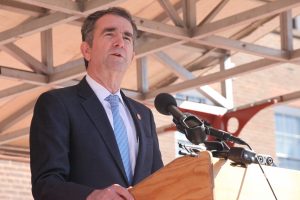 The Old Dominion is rushing headlong into unconstitutional tyranny thanks to its virtually unchecked Democratic leadership.

According to The Washington Post, Virginia’s Democrat Gov. Ralph “Blackface” Northam announced in early November that the state’s blue guys “will at least start” their attempts to ban the “sale of [semi-automatic firearms] and high-capacity magazines, restoring the law that limits purchases to one gun a month, and a red flag law that would empower a court to temporarily remove a gun from a person deemed to be a risk to himself or others.”

When asked about confiscating legally-owned firearms from Virginians, Northam said “that’s something I’m working [on] with our secretary of public safety.”

The Washington Free Beacon’s Stephen Gutowski pointed to the bill in a tweet on Monday, saying, “Meanwhile Virginia Democrats are filing bills to make the possession of millions of currently-owned firearms illegal. SB16 bans possession of many rifles without any grandfathering provision which means it’s confiscation.”

Meanwhile Virginia Democrats are filing bills to make the possession of millions of currently-owned firearms illegal. SB16 bans possession of many rifles without any grandfathering provision which means it's confiscation. https://t.co/i0SnJNDTxm https://t.co/j6DaJAj7g2

Under the legislation’s murky definition of “assault firearms,” virtually all semi-automatic rifles and shotguns, which are owned by tens of millions of Americans, would be subject to the ban. Without any sort of “grandfathering provision” in the bill, as Gutowski points out, “it’s confiscation.”

Gun confiscation and other gun control measures have been part of Northam’s agenda, but took on increased importance after a picture of two men, one in blackface and the other in KKK robes, was uncovered on Northam’s page in a medical school yearbook. In his first major public appearance after the scandal broke, Northam called for a special session of the legislature in order to reconsider his gun control package, following the recent strategy used by prominent liberals of pivoting to gun control after brushes with controversy.

Democrats have a strong incentive, in the form of millions in dark money, to implement new gun control laws. In each of the last three election cycles, Everytown for Gun Safety—backed by billionaire Michael Bloomberg—and other gun control groups have spent large sums of money backing Democrats. Everytown spent $2.5 million to help push Democrats into the majority in Virginia, while the National Rifle Association spent just $300,000 supporting Republicans, according to CNBC.

After watching their state slip into the hands of Northern Virginia leftists for years now, Virginians are kicking up their efforts to fight this tyranny with “Second Amendment sanctuary” counties.

I’ve never seen anything like this, and I’ve been doing this for over 20 years. It’s a sleeping giant that had been pretty much not paying attention to politics, and now they’re awake, and now they’re flooding these sanctuary county hearings. Flooding them.

“Sparked by Democrats’ capture of the Virginia legislature three weeks ago, the sanctuary movement has already passed resolutions similar to VCDL’s model in nearly a quarter of the state’s counties,” the Free Beacon continues. “The movement could give newly elected Democrats from more moderate jurisdictions pause when considering new gun control bills—especially the confiscation plan supported by Governor Ralph Northam (D.). The sanctuary proposals could also set up a showdown between state and local officials if the former adopt new gun bans or a confiscation scheme.”

Now’s not the time to give up, Virginians!