Dem. Candidate Who Danced With Witches and Bashed Her Own State Thinks Stay-at-Home Moms Are “Leeches” 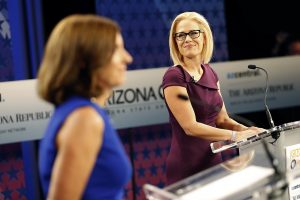 You know someone’s a real feminist when they bash the decisions made by empowered women who freely choose to stay home with their children and pour all their energy into raising their children.

The “sisterhood” goes out the window in about five seconds once women do anything other than, well, things men normally do.

And they wonder why so many women don’t want to be feminists.

Krysten Sinema is the Democratic challenger to truly empowered woman Martha McSally, who is a war hero and veteran who retired from the Air Force a full colonel.

While McSally was logging hundreds of hours flying over combat zones (oh yeah, she was also a combat pilot), Sinema was still in college.

McSally is the picture of a trailblazing, empowered woman, while Sinema’s greatest accomplishment before beginning her political career appears to be working on Ralph Nader’s presidential campaign.

Maybe not actually having accomplished much despite being an empowered, independent career girl has made Sinema bitter, because she sure doesn’t seem to think much of the state she’s running for or the sex she claims to represent.

In 2012, when Sinema was running for the House, Pheonix New Times reported:

In a weird, 2006 interview with the Scottsdale nightlife magazine 944, she said a passel of things that are sure to be brought up by a GOP opponent, including this one, which is far worse than what Rosen said:

“These women who act like staying at home, leeching off their husbands or boyfriends, and just cashing the checks is some sort of feminism because they’re choosing to live that life. That’s bullsh*t. I mean, what the f*** are we really talking about here?”

You’ve probably seen Sinema’s comments about her own state which she seems to have a pretty low opinion of, but if not, here’s a quick summary:

She has called Arizona “the meth lab of democracy,” warned people not to let their states “turn into” Arizona, and visibly cringesjust saying the name of the state she represents.

Obviously, Sinema isn’t going for the housewife vote. After all, women who stay at home just get told to vote by their husbands, right?

But the Wicca vote, on the other hand, she’s got that on lock:

And there was the time she encouraged Wiccans to “dance, twirl, and stay in touch” with their “inner creativity and with the Earth” after she invited the happy campers to a rally where she spoke. And apparently at a later demonstration, she joined in “singing and spiraling in the pagan’s circle only 5 rows back from the police line.”

If you want to get Democrats to vote for you, this is apparently the strategy in 2018.

Lord, help us all.