Dem 2020 Candidate Talks Minimum Wage Hikes On ‘The View’, What Could Go Wrong? 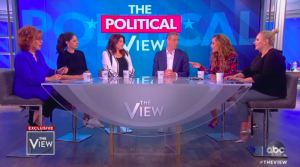 When you want to nab a few easy votes from the subset of American women who aren’t seriously interested in their endangered freedoms and liberties in America, what better place to do a little politickin’ than The View!

Why anyone would consider a squawking henhouse like that an acceptable venue for campaigning is beyond me, but maybe 2020 hopeful Rep. Tim Ryan (D-OH) knows something I don’t.

In fact, there seem to be a few things Ryan must know that the rest of us fiscal conservative cavepeople don’t know, like some economic secret sauce that makes minimum wage hikes somehow viable, or the location of a magical money tree.

And, of course, the softballs tossed at him by The View hosts don’t offer a whole lot of clarity. Instead, they spin the ex-NRA member and ex-pro lifer’s turncoat antics as “centrism”.

“Most people describe you as a centrist, a centrist Democrat,” co-host Sunny Hostin asked Ryan. “You’re a recreational hunter. You were an NRA member. Up until four years ago you were pro-life. How do you win over Progressives within the Democratic party?”

Meghan McCain interjected, “I don’t think your problem is winning over the midwest and places where you’re from. How are you going to win over the Progressive wing of the party who think that the Green New Deal is the most important challenge for Americans right now?”

Ryan proceeded to give an explanation that he supports “free enterprise” as well as higher taxes, prompting co-host Joy Behar to praise him, saying, “You’re like Joe Biden a little bit, aren’t you?”

Now, in just about any other place, those’d be fightin’ words. But, on The View, that’s a mighty big compliment.

Further on in the interview, McCain asked Ryan if the Democrats are shooting themselves in the foot by cooking up a new witch hunt every single year to try to impeach their president, referring to attempts to subpoena the Mueller report and get their grimy claws on Trump’s tax returns.

“Do you think the Democrats are focused on the wrong thing going into 2020?”

Ryan mostly disagreed that witch huntin’ Dems should back off of the president and focus on actual issues. “We need transparency,” he urged, though he did say he believes the Democrats need to “get back to an economic message:”

“…I’m for the fight for 15. I believe we do need to raise the minimum wage. But we can’t be saying we’re for 15,” Ryan explained. “We need $30 an hour jobs, $40 an hour jobs. We need to get back to that message. And when we talk about the new technologies, that’s what those jobs pay. So let’s get busy putting that together.”

Now, I’d like to give Rep. Ryan a heaping helping of the benefit of the doubt here. After all, I can understand how sitting at The View’s roundtable for any duration can eat away at the brain cells pretty quick.

But, did he seriously just say that the $15-an-hour minimum wage Dems are demanding isn’t enough and that we need to somehow make high-paying tech jobs the standard? Was he suggesting an infusion of resources into the growing tech sector? Or, did he mean exactly what it sounds like, that we need to make white collar wages the minimum in America?

Maybe you had to have been there, because the audience and hosts seemed to love Ryan’s suggestion, whatever on earth it really was. “I’ve got to say, I’m very impressed with you,” Behar gushed. “Aren’t we all? He’s wonderful! We like you!”

I suppose one needs to have a healthy degree of ignorance of basic economics in order to jump ship from conservative to liberal as Ryan has. With such an astoundingly slippery grasp of how wage hikes aggravate inflation, it may be more appropriate for Rep. Ryan to head back to school in 2020, not the Oval Office.